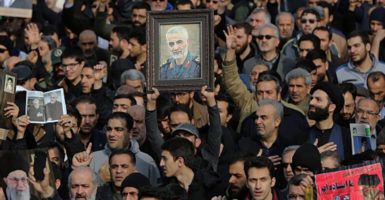 Protesters gather in Tehran, Iran, on Friday to grieve the killing of Qassem Suleimani, a top Iranian general, by a U.S. drone strike Thursday in the Iraqi capital of Baghdad. (Photo: Fatemeh Bahrami/Anadolu Agency/Getty Images)

Iran is threatening retaliation and Iraq is considering forcing U.S. officials out of the country after an American drone strike killed Qassem Suleimani, the notorious Iranian general blamed for the deaths of hundreds of Americans.

The killing of Suleimani already has widened the partisan divide in the United States.

“General Qassem Soleimani has killed or badly wounded thousands of Americans over an extended period of time, and was plotting to kill many more…but got caught!” Trump tweeted, using a variant spelling of the general’s name. “He was directly and indirectly responsible for the death of millions of people, including the recent large number….of PROTESTERS killed in Iran itself. While Iran will never be able to properly admit it, Soleimani was both hated and feared within the country. They are not nearly as saddened as the leaders will let the outside world believe. He should have been taken out many years ago!”

House Speaker Nancy Pelosi, D-Calif., criticized the president’s action for leaving Congress out of the decision and for potentially provoking more terror.

“American leaders’ highest priority is to protect American lives and interests. But we cannot put the lives of American service members, diplomats, and others further at risk by engaging in provocative and disproportionate actions,” Pelosi said in a written statement late Thursday. “Tonight’s airstrike risks provoking further dangerous escalation of violence.  America—and the world—cannot afford to have tensions escalate to the point of no return.”

The administration has conducted tonight’s strikes in Iraq targeting high-level Iranian military officials and killing Iranian Quds Force Commander Qasem Soleimani without an Authorization for Use of Military Force (AUMF) against Iran. Further, this action was taken without the consultation of the Congress.

For the past 21 years, Suleimani was commander of the Quds Force, a division of the Islamic Revolutionary Guard Corps focused on military and spying operations outside Iran.

Secretary of State Mike Pompeo said Suleimani, 62, was in the process of preparing additional attacks on U.S. diplomats in the region.

The State Department has warned Americans to leave Iraq.

“With his departure and with God’s power, his work and path will not cease, and severe revenge awaits those criminals who have tainted their filthy hands with his blood and the blood of the other martyrs of last night’s incident,” Khamenei said.

“Why would the Soleimani assassination not immediately trigger a limited or even major conflict?” the Iraq leader said in a statement. “The structural factors are powerful.”

However, many Iraqi citizens were celebrating, as demonstrated in a Pompeo tweet.

This U.S. military success is comparable to the killing of Osama bin Laden in 2011, said James Jay Carafano, a retired Army lieutenant colonel who is vice president for national security and foreign policy at The Heritage Foundation.

“The reported deaths of Iranian General Qassem Suleimani and the Iraqi commander of the militia that killed an American last week was a bold and decisive military action made possible by excellent intelligence and the courage of America’s service members,” Carafano said in a prepared statement. “The Islamic Revolutionary Guard Corps, led by Suleimani, was responsible for the deaths of more than 600 Americans in Iraq between 2003-2011, and countless more injured.”

“He was a chief architect behind Iran’s continuing reign of terror in the region,” Carafano said of Suleimani, adding:

This strike against one of the world’s most odious terrorists is no different than the mission which took out Osama bin Laden—it is, in fact, even more justifiable since he was in a foreign country directing terrorist attacks against Americans.

His death is a huge loss for Iran’s regime and its Iraqi proxies, and a major operational and psychological victory for the United States.

Going forward, the Trump administration must keep its maximum pressure strategy in place. What the administration must offer now is firm diplomacy backed by the continuing, credible threat of the use of military force. President Trump has wisely shown that he will act with the full powers of his office when American interests are threatened, and the extremist regime in Tehran would be wise to take notice.

House Armed Services Committee Chairman Adam Smith, D-Wash., said he was troubled by the “chain of events” that might now occur.

“I do not want an open war with Iran, and neither do the American people. However, the absence of a coherent strategy has strained an already tense relationship between Washington and Tehran,” Smith said in a prepared statement.

“It appears that in lieu of a strategy, the Trump administration has chosen military escalation. The administration must clearly articulate how this action, and potential future actions, will protect U.S. global interests while ensuring the safety and security of our personnel in the region and worldwide.”

However, Sen. Ben Sasse, R-Neb., a member of the Senate Intelligence Committee and frequent Trump critic, strongly supported the administration’s action to take out the head of Iran’s Islamic Revolutionary Guard Corps.

“This is very simple: General Soleimani is dead because he was an evil bastard who murdered Americans. The president made the brave and right call, and Americans should be proud of our service members who got the job done,” Sasse said.

“Tehran is on edge—the mullahs have already slaughtered at least a thousand innocent Iranians—and before they lash out further they should know that the U.S. military can bring any and all of these IRGC butchers to their knees.”