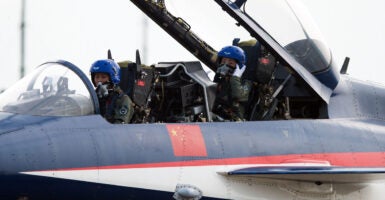 China’s People’s Liberation Army Air Force has been taking a more prominent role in Chinese military diplomacy. This was made abundantly clear earlier last week, when the PLA Air Force launched a series of aggressive shows of force near Taiwan in response to U.S. diplomatic visits to the island.

The display followed a visit by Keith Krach, the U.S. undersecretary of state for economic growth, energy, and the environment, to Taiwan on Sept. 17. Krach is the highest ranking State Department official to visit the island in 40 years, and his visit comes weeks after Health and Human Services Secretary Alex Azar visited in August.

To mark its extreme displeasure, Beijing amped up a series of military responses. Coinciding with Krach’s visit, multiple Chinese warplanes crossed the mid-line of the Taiwan Strait as part of what Beijing dubbed “military exercises.” While none of them overflew the island, the dozens of sorties marks a substantial increase in Chinese pressure.

More worrisome, Chinese officials denied the existence of a Taiwan Strait mid-line at all, reminding the world that, from Beijing’s perspective, Taiwan is part of China.

Among the various aircraft that crossed the mid-line were J-10 and J-11 fighters, J-16 fighter bombers, and H-6 medium-range bombers.

The H-6 also played a prominent role in a recently released Chinese video. A flight of bombers is seen taking off and flying over a desert landscape. At one point, a crew member flips a switch, and a missile is seen launching from the aircraft and striking an island airfield. The airfield looks very much like Andersen Air Force Base on Guam, as seen on Google Earth. The plane then returns to a Chinese base.

These series of vignettes highlight both the growing power of the PLA Air Force and some of the problems that underlie both it and the People’s Liberation Army writ large.

As noted in the recent Department of Defense annual report to Congress on the Chinese military, the PLA Air Force and PLA Naval Aviation (the Chinese navy’s air arm) together constitute the largest air force in the world. Its 2,500 aircraft include not only advanced fighters and fighter-bombers (such as the ones that crossed the Taiwan Straits mid-line), but also refueling tankers, electronic warfare aircraft, and airborne early-warning aircraft, all of which are force multipliers.

Yet, at the same time, the Chinese military suffers from a distinct lack of combat experience, and this affects how it portrays itself. The video that the Chinese released apparently incorporates Hollywood footage of bomb effects. Even for the Chinese military, which hasn’t fought a war since 1979, its impressions of war are apparently defined by American movies.

This has several implications. Since China hasn’t fought a war since 1979, there’s very little Chinese footage that can be used to represent the PLA’s activities.

While important to external audiences, the video depicting an attack on an unnamed but clearly American base is really aimed at China’s own population, not the U.S. So, what would work for a Chinese audience? Images that they’re already familiar with—which means images taken from American movies.

Is this embarrassing? Absolutely. But it’s also understandable, and highlights the problem of “cultural security” that Chinese leaders have repeatedly warned about.

But without combat experience, three generations of Chinese (and much of the rest of the world) takes American forces, procedures, and weapons as the gold standard.

Thus, even as the PLA Air Force plays a growing role in trying to shape regional security, its template appears likely to be shaped by American culture.