At 245 Years Old, the Navy Embodies a Culture of Innovation, Fraternity, and Courage 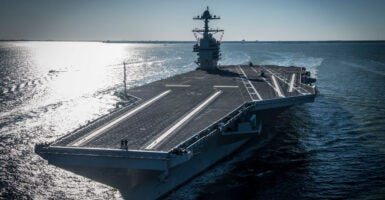 Oct. 13 is the 245th birthday of the U.S. Navy. In its long history, its achievements have been remarkable and have embodied the virtues of innovation, fraternity, and courage. Pictured: The first-in-class USS Gerald R. Ford departs port at Newport News, Virginia, April 8. (Photo: Mass Communication Specialist 2nd Class Ridge Leoni/U.S. Navy/Getty Images)

Our Navy celebrates its 245th year today, Oct. 13. In its long history, its achievements have been remarkable and have embodied the virtues of innovation, fraternity, and courage.

Despite the global coronavirus pandemic, the Navy continues building ships, deploying forces in harm’s way, and advancing novel technologies that will assure its maritime leadership for years to come.

In May, the Navy used a solid-state laser from the USS Portland and shot down a drone aircraft. Like steam power, radio, and turreted main guns, lasers have the potential to revolutionize the design of future warships.

The Navy’s work on lasers (amongst other promising technologies) continues a legacy of innovation—it is taking its place among a Revolutionary War submarine, Civil War undersea mines, and modern aircraft carriers.

In fact, the USS Ford, the Navy’s newest aircraft carrier, is today conducting air intercepts off the U.S. coast and will join the fleet next year. This ship sports perhaps too many novel and cutting-edge technologies in one hull, and further demonstrates the Navy’s tireless pursuit of innovation.

Reflecting an ideal underappreciated generally, and taken for granted within the Navy, is the spirit of fraternity—selfless dedication.

This spirit has resonated in the Navy since the immortal words “Don’t give up the ship!” were uttered during the Battle of Lake Erie during the War of 1812 and during the attack on the USS Samuel B. Roberts, which was inadvertently attacked during the Iran-Iraq War.

More recently, the fraternal spirit was abundant among the crew as they worked to control damage when a fire broke out on the USS Bonhomme Richard.

In every case, and others too numerous for this article, sailors and officers routinely demonstrated a selfless regard to support others. In this respect, at the height of the COVID-19 pandemic, and with little understanding of the virus and with only days forewarning, the crews of the hospital ships USNS Mercy and USNS Comfort sailed to provide extra medical capacity to American cities fighting the virus.

In another demonstration of fraternity, it’s important not to forget the ultimate sacrifice given by Ensign Joshua Watson, Airman Mohammed Haitham, and Airman Apprentice Cameron Walters this last December, who died attempting to stop a terrorist with links to al-Qaeda at Pensacola Naval Air base.

During this era of great power competition, courage in executing routine missions from the mundane to the frightening all weigh heavily on this nation’s continued security and prosperity. Against competitors Russia and China, who seek any advantage at our Navy’s expense or reputation, our sailors and officers are challenged and perform exemplary every day.

Amid crises and rising tensions at several hot spots these last 12 months, conflict has not broken out. This is remarkable, given the last year has been especially fraught—months of riots in Hong Kong, reelection of leaders in Taiwan held in contempt by Beijing, and trade disputes that have led to U.S.-Chinese relations dropping to historic lows.

Into this crucible, the Navy began a series of deployments in the South China Sea, signaling our commitment to freedom of navigation and our partner nations, as well as our willingness to operate well within the reach of the Chinese military.

In the Eastern Mediterranean in March, the USS Dwight D. Eisenhower and France’s Charles de Gaulle conducted dual aircraft carrier operations. These operations were conducted in a region gripped by tensions between two NATO allies, Greece and Turkey, over a maritime dispute, not to mentioned Russia’s continued presence—which is prolonging conflict in Syria—and unrest in Lebanon.

At each of these hot spots, the Navy has been present and in force acting to dissuade bad actors intent on conflict and destroying the rules-based order. Critical to this success has been the demeanor, good judgement, and tenacity of the Navy’s sailors and officers standing watch at sea.

On Oct. 7, Secretary of the Navy Kenneth Braithwaite took an action that is significant, and perhaps underappreciated outside of the Navy, when he chose the name “USS Constellation” for the first of a new class of frigate. Amongst sailors and naval scholars accustomed to the sometimes politicized naming of ships, the name is refreshing and draws attention to founding principles.

The first USS Constellation entered service in 1797. It incorporated innovations that in its day outclassed all other ships of its size. Braithwaite’s decision reminds us that the purpose of the Navy is to secure American interests overseas, as the original ship did against the Barbary pirates, intercepting slave traders and safeguarding U.S. whalers off the coast of Peru during its revolt against Spain.

Echoing the birthday message of Adm. Michael M. Gilday, the chief of naval operations, the secretary’s action helps to draw attention to the rich history and strong service culture of the nation’s Navy as we look forward.

Amid internal challenges and threats abroad, as the Navy confidently sails ahead to another birthday, it is perhaps fitting to quote America’s first naval hero, John Paul Jones: “I have not yet begun to fight!”