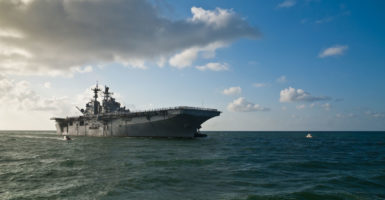 How prepared is the United States military to defend the American homeland, win wars abroad, and preserve freedom of commerce internationally?

“Marginal” is a reality-based description for America’s military, according to The Heritage Foundation’s 2020 Index of U.S. Military Strength, set for release Wednesday.

These metrics suggest that the United States must maintain a sufficiently sized and advanced military force that is ready to “fight tonight” if needed.

To determine military preparedness, the 2020 index considers three variables: the global operating environment, the threats that face America, and the posture of the U.S. military itself.

Currently, the United States’ operating environment is ranked as “favorable,” thanks to American allies and our strong international presence, which allows American interests to be pursued more seamlessly than not.

However, threats to America—such as China, Russia, Iran, and North Korea—are classified as “high,” while U.S. military power to counter those threats is rated only “marginal.”

Our adversaries won’t wait for us to catch up.

Their growing belligerence is apparent from Iranian foreign policy in the Strait of Hormuz, for example. This year alone, Iran brazenly shot down a U.S. drone and attacked six merchant vessels in international waters, prompting the U.S. to deploy the USS Abraham Lincoln aircraft carrier strike group to protect American service members and international shipping lanes.

But such swift responses are impossible without the proper resources. Unfortunately, maintenance backlogs and funding shortfalls within the Navy are providing barriers to full naval readiness to address such conflicts. That was recently demonstrated by the aircraft carrier USS Harry S. Truman’s delayed deployment.

Increasingly belligerent threats, coupled with a realistic assessment of American military capability, capacity, and readiness, necessarily shine the spotlight on the need for consistent and increased defense funding.

While the global operating environment and foreign threat levels are not fully within American control, our defense budget—and, consequently, our military capacity and capabilities—is exclusively within U.S. control.

A bolstered defense budget is needed specifically to modernize the force and increase its size.  Especially as Russia, China, and Iran fortify their own military capabilities, the United States must be fully ready to quell instability and conflict.

Today, the United States possesses the strongest military in the world, but others are working as fast as they can to build capability. Our armed forces deserve the proper resources to operate at full capacity, capability, and readiness to defend America and our interests.