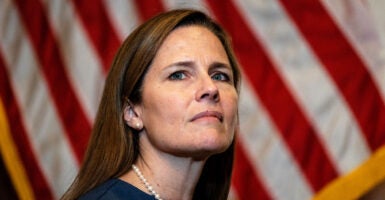 While Congress and courts around the country have adapted to working during the pandemic, Senate Judiciary Committee Democrats are insisting that the nomination of Judge Amy Coney Barrett should be delayed because of COVID-19. (Photo: Demetrius Freeman-Pool/Getty Images)

Senate Judiciary Committee Democrats are trying anything they can think of to delay or block the Supreme Court nomination of Judge Amy Coney Barrett. These disingenuous tactics will fail.

For example, they wrote the committee’s chairman, Sen. Lindsey Graham, R-S.C., on Oct. 3 to say that holding the hearing, scheduled to begin on Oct. 12, “threatens the health and safety of all those who are called upon to do the work of” the Senate.

Questioning a nominee by video, they claimed, “ignores the gravity of our constitutional duty to provide advice and consent on lifetime appointments, particularly those to the nation’s highest court.”

Courts around the country have found ways to adjust their work in light of changing circumstances (see here, here, and here).  Similarly, Congress has more options than ever for adapting its legislative business, including committee hearings, even during a pandemic.

Senate Majority Leader Mitch McConnell, R-Ky., points out that Senate committees have conducted more than 150 “hybrid” hearings over the last six months, in which members have been able to participate in-person or by live videoconference. Either way, it’s a live hearing.

This complaint also exaggerates the significance of confirmation hearings. Meetings in which a Supreme Court nominee appears and answers questions from senators are not only optional, but a fairly modern addition to the confirmation process.

The Senate confirmed more than a dozen Supreme Court nominations in the 20th century without hearing from the nominee and, in several instances, with no hearing at all.

Even today, while they can attract initial media attention, confirmation hearings are only a small piece of the process.

On average, the days devoted to the hearing are only about 5% of the time between a Supreme Court nomination and confirmation. The rest, including news coverage, commentary, analysis by legal experts, and public access to a nominee’s record, can provide much more, and more meaningful, information. None of that is affected in any way by the pandemic.

Today, though it’s been just three years since the Judiciary Committee examined Barrett’s qualifications for judicial service, Senate Democrats insist not only that the hearing is critical, but that the entire confirmation process depends on conducting that hearing in a particular way.

If anyone believes that Senate Democrats would support Barrett’s nomination if the hearing were held the old-fashioned way, I have some ocean-front property in Utah for sale.