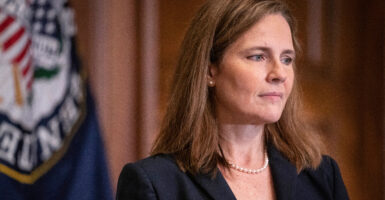 Protesters marched Thursday night outside Justice Amy Coney Barrett’s home shouting, “F— the court” and “We are not your incubators.”

Barrett is one of five Supreme Court justices who is believed to be a vote in favor of a decision in the Dobbs v. Jackson Women’s Health Organization case to overturn Roe v. Wade, the landmark 1973 abortion case.

Barrett lives by a cul-de-sac where young kids typically play in the evenings. The kids were playing there Thursday night when the protesters arrived. When the parents heard the loud noises and vulgar language, they came out to protect their children, and told the kids to come home.

Some parents stood there in awe, covering the tender ears of their babies as the f-bomb was being shouted over a loud speaker.

So the one safe, tranquil place these kids have—their neighborhood—was no longer available to them that night, or any Thursday night this summer, so that these vulgarians can break the law. (The protesters are planning to continue protesting outside Barrett’s home on Thursdays.)

Protesters previously marched outside Barrett’s home May 11 and 14. There also have been protests outside the homes of Chief Justice John Roberts and Justices Brett Kavanaugh and Samuel Alito.

A federal law, 18 U.S.C. §1507, states: “Whoever, with the intent of interfering with, obstructing, or impeding the administration of justice, or with the intent of influencing any judge … in the discharge of his duty, pickets or parades … in or near a building or residence occupied or used by such judge … shall be fined under this title or imprisoned not more than one year or both.”

So far, there do not appear to be any protesters who have been arrested.

Here’s what I saw Thursday night:

>>> Read about what we saw at pro-abortion protests at the homes of Justices Brett Kavanaugh, John Roberts, and Samuel Alito earlier this month. You can also check out our coverage of the first and second protests at Justice Amy Coney Barrett’s home.