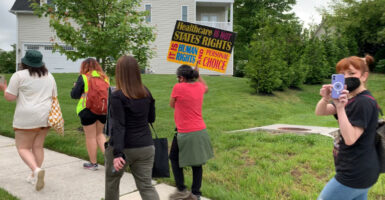 Five pro-abortion protester marched to Justice Amy Coney Barrett’s home Saturday evening. They circled her cul-de-sac several times before exiting back out of the neighborhood on foot.

The small group carried two pro-abortion signs and chanted “your neighbor says post-Roe, we say hell no,” and “they say no choice, we say pro-choice” as they walked through the Falls Church, Virginia neighborhood, about 12 miles outside of Washington, D.C.

The Daily Signal asked the protesters if they would like to comment on why they chose to demonstrate outside Barrett’s home. One of the five quickly said “no.”

The demonstration is believed to have been organized by the pro-abortion group Ruth Sent Us, which says on their Twitter profile that they “rise up against a corrupt and illegitimate Supreme Court.”

The protest is the second this week outside Barrett’s home.

On Monday, pro-abortion activists marched outside the justices’ house dressed in costumes from the “The Handmaid’s Tale,” a TV show that depicts a totalitarian society in which women are treated as property.

The demonstrations come in response to a leaked Supreme Court draft opinion on the Dobbs v. Jackson Women’s Health Organization case, which indicates that the justices are going to overturn the 1973 Roe v. Wade ruling that legalized abortion on demand.

The final opinion on the Dobbs case has not yet been released.