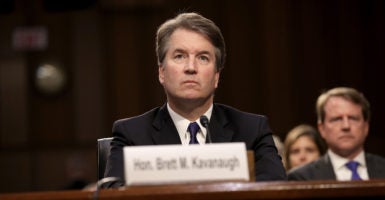 In the end, the Democrats’ smearing of Brett Kavanaugh is about delegitimizing the Supreme Court—the only institution that will inhibit the progressive agenda no matter who wins elections.

In the mind of Democrats, conservative justices aren’t merely wrong; they’re nefarious, racist, and extremist. So it’s not surprising that virtually any smear against Kavanaugh is rationalized.

In this world, the accused, rather than the accuser, bears the “burden of proof.” In this world, hucksters like Michael Avenatti are turned into experts, and major news outlets will eagerly repeat and spread slander as news.

Which is what happened last week when The New York Times ran an excerpt from a new book, “The Education of Brett Kavanaugh,” in which reporters Robin Pogrebin and Kate Kelly not only rehashed allegations against Kavanaugh, but claimed that he’d been in another drunken incident in his college days.

>>> The Media Reboots Its Crusade Against Kavanaugh

As it turned out, the reporters had somehow failed to mention that the alleged victim had declined to be interviewed because she didn’t recall the incident.

Whether dispositive or not, it seems like a noteworthy detail to skip in an excerpt accusing a Supreme Court justice of inappropriate sexual conduct.

In any event, the Times, caught in a blatantly unprofessional act, was forced to add an editor’s note that debunked the most newsworthy aspect of its own article. It was just another in an interminable series of “mistakes” by supposedly nonpartisan journalists that happen to skew in the same exact partisan direction while creating the same useful perceptions.

Headlines about “new allegations” were blasted across the media landscape—even after the correction. The important thing to them is that journalists can keep framing Kavanaugh as a problematic justice and Democrats can keep using the word “illegitimate” to describe his seat.

Sen. Kamala Harris, D-Calif., who not long ago put unsubstantiated gang rape charges against Kavanaugh in the congressional record, claims he underwent “a sham process and his place on the court is an insult to the pursuit of truth and justice.”

Jeffrey Toobin, CNN’s “Chief Legal Analyst,” noted that “40% of the Republican appointees to the Supreme Court have been credibly accused of sexual misconduct.”

This is the point of the whole enterprise, right? The implication is, “Why would any American respect the court’s rulings when it’s packed with sexual abusers?”

>>> The True, Behind-the-Scenes Story of the Kavanaugh Confirmation

Now, I hate to break the news to Toobin, but notwithstanding the hagiography created by the cultural and political left, the notion that Anita Hill was a “credible” accuser is, to say the least, highly debatable.

To this day, not a single person—and Clarence Thomas had scores of subordinates working for him during his years in government, before and after his confirmation—came forward to substantiate that the judge had ever acted in the ways Hill described.

On the other hand, 12 former female colleagues of both Thomas and Hill signed an affidavit supporting him. Not one person who worked with both came forward to vouch for Hill.

And, as with Christine Blasey Ford, the FBI investigated Hill’s claims and couldn’t find any evidence to back her accusation.

After the hearings, agents sent additional affidavits to the Senate accusing Hill of misleading the public by skipping important portions of her story and offering public testimony that contradicted what she had told law enforcement officials.

Yet, in the liberal imagination, Thomas is guilty, the same way Kavanaugh will be forever considered guilty, although none of Ford’s contentions have been corroborated or substantiated.

Not a single person at the mysterious party where Kavanaugh supposedly forced himself on her have come forward. Not even her lifelong friend, Leland Keyser, who was pressured by friends and political forces to accuse Kavanaugh, remembers any such incident.

“It just didn’t make any sense,” Keyser told The New York Times reporters about Ford’s allegations. “I don’t have any confidence in the story,” she added.

Deborah Ramirez, another accuser, hadn’t even been able to recall supposedly swatting away Kavanaugh’s penis at college party until New Yorker reporters asked her about it—well, after “carefully assessing her memories” and landing on the correct answer.

Now the Times reports that other third parties—Ramirez’s mother, for instance—remember hearing about the incident, as well.

I assume many more people will have miraculous recall as we move forward. What there won’t be are any consequences for journalistic malpractice.

And Democrats, who have no interest in living with the constraints of the Constitution, probably see little downside in destroying trust in the courts even as they weaponize a serious issue for partisan gain.