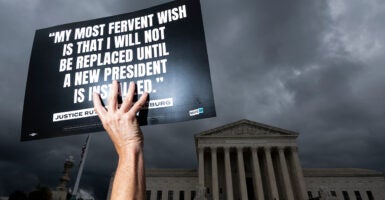 Liberal groups are warning that Supreme Court nominee Amy Coney Barrett will severely restrict reproductive freedoms and strip health care access, arguing that the vacancy shouldn’t be filled until after the next inauguration.

“Nominating Barrett is an insult to RBG’s legacy and everything she spent her life fighting for,” Planned Parenthood Action Fund tweeted. “This is the people’s court, the people’s seat.”

Amy Coney Barrett is a threat to our reproductive rights and health care. Nominating Barrett is an insult to RBG’s legacy and everything she spent her life fighting for. This is the people’s court, the people’s seat. #LetThePeopleDecide pic.twitter.com/6rgLmn6Udx

The pro-abortion Emily’s List also emphasized that nominating Barrett to the Supreme Court “puts everything we care about at risk—health care coverage, abortion, and reproductive health care.”

“We have to fight back with everything we have,” the organization tweeted.

Barrett “will turn back the clock on equality,” according to the National Organization for Women.

“Donald Trump and the Senate Republicans want to steal another seat on the Supreme Court so that Amy Coney Barrett can help repeal Roe [v. Wade] and shred the Affordable Care Act—but not before she votes with a new, ultra-conservative majority to validate an election he intends to steal,” the organization said in a statement.

Liberal groups also emphasized that the Supreme Court vacancy should not be filled until after the 2020 presidential election.

“The fact that President Trump has nominated anyone to fill Justice Ginsburg’s Supreme Court seat in this moment of national crisis is a direct threat to our health and rights and a disgrace to our democracy,” Johnson tweeted.

The Women’s March echoed these sentiments, tweeting: “No confirmation until inauguration.”

Amy Coney Barrett’s nomination is a sign of the GOP’s desperation. They’re losing this election and will risk it all to cheat their way to a win.

We won’t let them. No confirmation until inauguration.

Join us by pledging to march with us on 10/17: https://t.co/LvJ2p1ZJgi pic.twitter.com/6wTrqajnfV