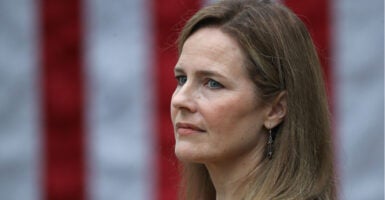 Seventh U.S. Circuit Court Judge Amy Coney Barrett looks on while being introduced by President Donald Trump as his nominee to the Supreme Court at the White House Sept. 26, 2020. (Photo: Chip Somodevilla/Getty Images)

If you thought liberals scraped the bottom of the barrel with their attacks on Justice Brett Kavanaugh, I’m very sorry to inform you that you were wrong.

Dana Houle, a self-described political consultant to Democrats, previewed this new low by suggesting that perhaps Barrett and her husband illegally adopted two of their children from Haiti.

Barrett and her husband have seven children ranging in age from 8 to 19, two of whom are adopted.

Without any provocation, Houle began a long and disturbing Twitter thread: “I would love to know which adoption agency Amy Coney Barrett & her husband used to adopt the two children they brought here from Haiti.”

In a since deleted tweet, he asked if the press would investigate Barrett’s adoptions. He said: “Some adoptions from Haiti were legit. Many were sketchy as hell.”

He went on to disparage the Barretts’ religious views, saying:

Would it matter if her kids were scooped up by ultra-religious Americans, or Americans who weren’t scrupulous intermediaries & the kids were taken when there was family in Haiti? I dunno. I think it does, but maybe it doesn’t, or shouldn’t.

Of course, there is no evidence that Barrett or her husband did anything unlawful, and when asked directly, “Do you have any reason to believe she adopted her children illegally?” Houle responded, “Do you know anything about post-earthquake adoptions from Haiti?”

When another person said that the attack on the Barrett family was “based on nothing but prejudice and bigotry,” Houle responded:

Oh just f—ing spare me. We don’t do foreign adoptions because it’s so difficult to avoid unethical adoptions.  Also people w[ith] bio kids shouldn’t be adopting children w[ith] whom they have no connection.

This attack was mirrored by John Lee Brougher, the managing director of NextGen America, a progressive political action committee, when he said (in a now deleted or hidden tweet) “[t]ransracial adoption is fraught with trauma and potential for harm, and everything I see here is deeply concerning.”

What he saw in two adoptions that no one has ever had reason to question until it became politically expedient only he knows.

Make no mistake about it: This is the politics of personal and family destruction. It has no bearing on Barrett’s fitness for the Supreme Court.

It’s hard to believe, but this is not the first time this tactic has been used against a Republican judicial nominee. The New York Times pursued the same tactic against Chief Justice John Roberts—who has two adopted children—when he was nominated to the court in 2005.

Thankfully, the National Council for Adoption denounced that effort, calling adoption records “off limits.”  It said, “the adoption community is outraged that, for obviously political reasons, the Times has targeted the very private circumstances, motivations, and processes by which the Roberts became parents.”

It went on to say that their children’s adoption histories “have no bearing whatsoever on the suitability of John Roberts to serve on the U.S. Supreme Court” and that “this abject invasion of privacy shows a shameful disregard for the integrity of the family.”

The council concluded its statement by saying, “[s]urely decent people on both sides of the aisle will unite to decry this gratuitous and tasteless action.”

To their credit, some Democratic senators did, and the attack was called off.

The National Council for Adoption’s statement is as salient today as it was then. The Barretts’ adoptions are off limits and this disgusting attack should be denounced by every politician on both sides of the aisle.