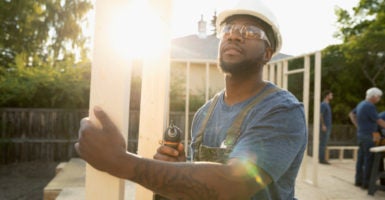 The black unemployment rate is good news for everyone except those who are more unhappy that Donald Trump is president than they are happy that blacks are working. (Photo: Getty Images)

The August jobs report from the Bureau of Labor Statistics showed more great news for all Americans. And particularly for black Americans.

The nation’s unemployment rate of 3.7% puts it near the lowest ever in the last half-century.

Black unemployment is at an all-time low at 5.5%.

So going back as far as we have data, the black-white unemployment gap averaged a difference of 4.9 percentage points, compared with 2.1 points now. The black rate averaged 100% higher than the white rate compared with 62% now.

This is good news for everyone except those who are more unhappy that Donald Trump is president than they are happy that blacks are working.

CNN’s Don Lemon told blacks that their vote should be influenced more by what is, according to him, Trump’s “racist behavior” than by the strong economy.

So these 349,000 black Americans now working, who weren’t working a year ago, should be thinking when they go to the voting booth that Don Lemon, whose net worth, according to various online sources, is somewhere between $3 million and $10 million, says Trump is a racist?

Lemon continued on with his CNN buddies that all the credit should go to Obama.

According to BLS, the average number of blacks working during 2016, the last year of Obama’s presidency, was 18.2 million compared with 19.5 million now.

My guess is these 1.3 million more black Americans now working will be more prone to listen to Black Entertainment Television founder, America’s first black billionaire, Robert Johnson, who said on CNBC, “I think the economy is doing absolutely great, and it’s particularly reaching into populations that heretofore have had very bad problems in terms of jobs, unemployment and the opportunities that come with full employment, so African-American unemployment is at its lowest level.”

Johnson went on to credit President Trump and the 2017 tax cuts for stimulating the economy.

The World Bank annually publishes a Doing Business report, grading nations on their conditions for starting and doing business. Economic research shows a powerful correlation between this index and economic growth. It is exactly this — a tax and regulatory environment more friendly to business — that the Trump administration has produced. And, as Johnson points out, every community benefits.

Along with the BLS, the National Federation of Independent Business, which represents the nation’s small businesses, also issued a strong report in August, showing an increase in August over July of workers added per firm.

Contrary to the message of Don Lemon, whom CNN pays a seven-figure salary to tell liberal viewers what they want to hear, Donald Trump’s accomplishments for black Americans are impressive.

First, of course, is a great economy. But in addition, the Opportunity Zone initiative has created compelling tax incentives to drive investment to 8,700 distressed ZIP codes nationwide. Criminal justice reform was passed to improve fairness in sentencing and introduce policies to reduce recidivism.

And, Planned Parenthood, the largest provider of abortions in the nation and to black Americans, announced withdrawal from the Title X program as result of a new rule prohibiting referrals for abortion except in cases of rape, incest and medical emergency.

Black Americans are doing great under this president, and as this continues, we can expect surprises from this community in November 2020.