Why Court-Packing Would Be Devastating to Our Republic 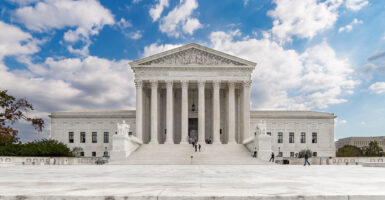 To ensure that legislation to change the Supreme Court’s size is not only passed but signed into law, court-packers would have to control both houses of Congress and the executive branch. (Photo: Mike Kline/notkalvin/Getty Images)

Numerous other Democratic politicians have either explicitly expressed their support for this or said that “everything is on the table,” including Sens. Kamala Harris, Chuck Schumer, Elizabeth Warren, Richard Blumenthal, Sheldon Whitehouse, and Mazie Hirono, as well as Reps. Nancy Pelosi, Alexandria Ocasio-Cortez, Joe Kennedy, and many others.

When asked during the Sept. 29 debate whether he supported packing the Supreme Court, presidential candidate Joe Biden said, “I’m not going to answer the question.” His running mate, Harris, has also avoided the question recently.

It’s important to understand both what “court packing” would require and how its impact would be felt.

Keeping the judiciary separate from manipulation by the political branches was one of the reasons for American independence from Great Britain. Chief Justice William Rehnquist once described judicial independence as the “crown jewel of our system of government.”

That jewel is easy to admire until its results don’t fit your politics. Court-packing refers to changing the structure of the judiciary to add judges deemed likely to render favorable decisions.

While America’s Founders sought to separate the judiciary from politics, court-packing deliberately brings them together.

We’ve been here before. After his landslide reelection in 1936, President Franklin Roosevelt proposed creating and filling additional judicial positions so that the Supreme Court would uphold, rather than strike down, his New Deal legislation.

Even though Democrats enjoyed enormous Senate and House supermajorities in the 75th Congress (1937-38), they rejected Roosevelt’s court-packing plan. The Judiciary Committee report on the bill said such court-packing’s “ultimate effect would undermine the independence of the courts” and “expand political control over the judicial department.”

The report’s arguments apply as much today as they did more than 80 years ago. Court-packing is simply “an attempt to change the course of judicial decision” by “neutralizing the views of some of the present members.”

Disagreeing with some judicial decisions, however, does not justify destroying the judiciary itself. “It is far better,” they said, “that we await orderly but inevitable change of personnel than that we impatiently overwhelm them with new members.”

Once court-packing destroys judicial independence, it cannot be restored.

Court-packing is no small project. Many people are surprised to learn that while the Constitution created the Supreme Court, Congress determines its size.

With the exception of five years during the Civil War period, the court has had nine members since 1837. In a 2019 National Public Radio interview, Ginsburg said that nine “seems to be a good number” and opposed court-packing because it would undermine “the safeguards for judicial independence, [which] are as great or greater than anyplace else in the world.”

The Senate and House of Representatives were designed to participate in the legislative process in different ways. The House is designed for action, with everything happening by majority vote.

The Senate is designed for deliberation, with rules that allow the minority to have a significant voice. Rule 22, for example, requires 60 votes to invoke cloture, or end debate, on a bill. A group of senators lacking the votes to defeat final passage of a bill might still be able to get their way by preventing any final vote at all.

Failure to end debate is a filibuster.

The filibuster has been part of the Senate’s legislative process since the turn of the 19th century. In fact, the opportunity for extended debate has been called the single most distinctive feature of the Senate since it was established in 1789.

Under the current rules, as long as 41 senators vote against ending debate on a court-packing bill, it could not pass the Senate and could not become law.

This is why Markey, Harris, Schumer, Warren, and many others want to “end the filibuster.” They want to lower the number of votes needed to end debate from 60 to a simple majority, the same as necessary for passing a bill.

While changing the actual words of Senate rules requires a supermajority, changing the “interpretation” of those words requires only a simple majority using the so-called nuclear option.

Any party in control of the House, Senate, and the White House could thereby abolish the legislative filibuster and then simply pass a new law increasing the number of Supreme Court justices, and lower court judges to boot, if they wished, and presto, it would be done.

As abolishing the filibuster would undermine the Senate’s role as a careful deliberating body, packing the court would undermine its independence, and together these tactics would change the nature of our constitutional government.

With the court’s independence gone, it would take on an even larger role in deciding fraught political questions than it does now. The temptation for a successive president whose party enjoys majority control in the House and Senate to pack the court further would likely be irresistible.

In a short time, the judiciary could largely supplant Congress as the chief legislative body. Legislative and constitutional questions would be decided, undecided, and re-decided with every swing of the electoral pendulum.

No government so unstable could last.

Packing the court will only ever yield short-term political victories at the cost of the long-term health of our republic.

Content created by the Daily Caller News Foundation is available without charge to any eligible news publisher that can provide a large audience. For licensing opportunities of this original content, email licensing@dailycallernewsfoundation.org.