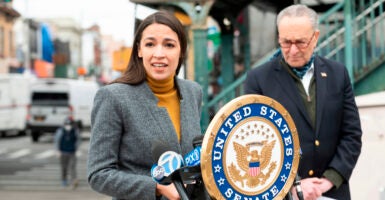 A bipartisan group dominated by former state attorneys general is pushing back against proposals from congressional Democrats and progressive activists to pack the Supreme Court by adding more justices.

“We feel that court packing, adding or for that matter subtracting justices for political advantage, is wrong,” former Tennessee Attorney General Paul Summers, an independent, told The Daily Signal. “It would denigrate the rule of law [in favor of] the rule of men. It undermines the independence of the Supreme Court.”

Summers is part of the Coalition to Preserve the Independence of the Supreme Court, which calls itself “Keep Nine” for short in a reference to the nine justices on the high court.

The coalition, with 27 members, has grown to include former members of Congress and former governors.

The organization is promoting a 13-word constitutional amendment that says simply: “The Supreme Court of the United States shall be composed of nine Justices.”

On the cusp of President Donald Trump’s nomination of another woman to fill the Supreme Court seat of Justice Ruth Bader Ginsburg, who died last week, some Democrats have insisted that adding justices would be appropriate revenge for Senate Majority Leader Mitch McConnell’s stated intention to hold a confirmation vote on the nominee.

Sen. Edward Markey, D-Mass., tweeted about the Kentucky Republican: “Mitch McConnell set the precedent. No Supreme Court vacancies filled in an election year. If he violates it, when Democrats control the Senate in the next Congress, we must abolish the filibuster and expand the Supreme Court.”

“I believe that also we must consider, again, all of the tools available [at] our disposal, and that all of these options should be entertained and on the table,” Ocasio-Cortez told reporters Sunday.

Senate Minority Leader Charles Schumer, D-N.Y., reportedly told fellow Senate Democrats on Saturday that “nothing is off the table for next year” if Republicans move to fill the vacant seat on the high court.

Sen. Richard Blumenthal, D-Conn., echoed Schumer in tweeting: “If Republicans recklessly & reprehensibly force a SCOTUS vote before the election—nothing is off the table.”

Passing a constitutional amendment to preserve the current total of nine Supreme Court justices would not be easy, Summers said, but noted that the process of amending the Constitution has been completed 27 times in the nation’s history.

“It will be hard to pass a constitutional amendment, but it will be harder on the country to denigrate a separate and equal branch of government,” said Summers, who was Tennessee’s attorney general from 1999 to 2006 and later served as a state appeals court judge. “If one party packs the court, then another party will win power and pack the court, and you could have 27 justices or more.”

“Court packing by one party would almost inevitably lead to retaliatory court packing by another party, undermining the independence of the court and potentially the rule of law itself,” Miller said in a written statement.

Exactly 231 years ago–on Sept. 24, 1789–Congress created a six-member Supreme Court. That same day, President George Washington signed the legislation and nominated the first chief justice and five associate justices. The Constitution doesn’t specify a total number, though, and it varied in the 19th century until stabilizing at nine since 1869.

A constitutional amendment to keep the court at nine justices “should be seriously considered,” said John Malcolm, director of the Meese Center for Legal and Judicial Studies at The Heritage Foundation.

“All of this talk about court packing is dangerous and divisive,” Malcolm told The Daily Signal. “The number is not set in the Constitution, but nine has worked pretty well for a long time.”

Voters support a “Keep Nine” amendment by a 3-1 margin, according to a John Zogby Strategies poll cited by the coalition.  Democrats back the amendment by a 2-1 margin, the poll found, while self-described independents and moderates back the proposal by nearly 4-1.

During his second term, President Franklin Roosevelt tried to add justices to the Supreme Court  and force the retirement of others when the high court ruled against certain New Deal programs. However, fellow Democrats stepped in to oppose the move.

“There was an attempt by FDR to pack the court,” Summers said. “It just divided the president’s allies and emboldened his opponents.”

Update: On the morning of Sept. 25, Steve Westly withdrew his support for the “Keep Nine” amendment, a coalition spokesman said.