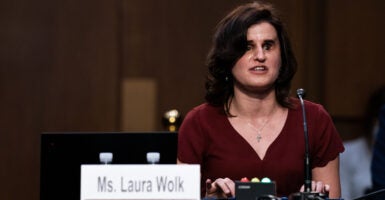 Laura Wolk addresses the Senate Judiciary Committee on Thursday on the fourth and final day of confirmation hearings for Supreme Court nominee Judge Amy Coney Barrett. Wolk said of Barrett, from whom she took two classes at Notre Dame Law School, "Her brilliance is matched only by her compassion, and her integrity is unassailable." (Photo: Anna Moneymaker/Getty Images)

Members of the Senate Judiciary Committee debated when they would vote on the nomination of federal Judge Amy Coney Barrett to the Supreme Court and listened to testimony from witnesses on the fourth and final day of hearings to fill the vacancy left by the death of Justice Ruth Bader Ginsburg.

Here are four takeaways from Day Four of the Barrett hearings.

Senate Judiciary Committee Chairman Lindsey Graham, R-S.C., announced that the panel would vote on Barrett’s nomination on Oct. 22. If approved as expected, it could go the full Senate for a final vote on Oct. 26.

Sen. Richard Blumenthal, D-Conn., made a motion to delay the vote on the Barrett nomination until after the Nov. 3 elections. The motion predictably failed on a straight 12-10 party-line vote after more than an hour of debate.

Democrats on the panel seeking to stop the confirmation complained that the nomination and vote were being rushed through.

“This is being done without precedent to show power and push someone through and really abrogate the value of hearings this committee should treasure and respect,” said Sen. Dianne Feinstein, D-Calif., the ranking member of the committee. “It breaches everything that we have held dear.”

Graham said the process is not out of the norm, and noted that Republicans have traditionally treated the nominees of Democratic presidents better than Democrats have treated those of Republican presidents.

“We’re going to vote on the judge on Oct. 22,” Graham said, later adding: “There’s no way you could ever convince me that Amy Coney Barrett is not qualified.”

Two officials with the American Bar Association also testified before the committee: Randall Noel, chairman of the ABA’s Standing Committee on the Federal Judiciary, and the ABA panel’s lead evaluator, Pamela Roberts.

“We gave Judge Barrett a rating of well-qualified, as you know, our highest rating,” Noel told the committee. “We interviewed Judge Barrett for over three and a half hours, Ms. Roberts and I, and we received additional information from her in the interim.”

Roberts said Barrett has a strong reputation in the legal community.

“Given the breadth, diversity, and strength of the positive feedback we received from judges and lawyers of all political persuasions and from so many parts of the profession, the Standing Committee would have been hard-pressed to come to any conclusion other than that Judge Barrett has demonstrated professional competence that is exceptional,” Noel said in remarks prepared for the committee.

Graham asked Noel and Roberts, “Would both of you feel comfortable going before Judge Barrett?”

Laura Wolk, 33, a former law student of Barrett’s at Notre Dame, having taken two classes from her between 2013 and 2016, testified before the committee.

“In part because of her unwavering support, I am the first blind woman to serve as a law clerk on the Supreme Court of the United States,” she said.

“You have heard over the past few days about Judge Barrett’s judicial qualities, which are beyond reproach, but should you confirm Amy Barrett, the country will receive something far greater than simply an unparalleled legal mind. It will gain the service of one of the kindest individuals I have ever known,” Wolk said, adding:

Her brilliance is matched only by her compassion, and her integrity is unassailable. I am not speaking in mere abstractions here. Rather, I have experienced these characteristics firsthand, with life-changing results.

Wolk, who clerked for Justice Clarence Thomas, detailed how Barrett, as her professor, worked to ensure that she had the technology needed to level the playing field with other students for her despite her disability.

“Anyone who has interacted with her knows that she is a woman of her word. She means what she says, and she says what she means. When she promised to advocate for me, she commanded my trust,” Wolk said.

To this day, I do not know what Judge Barrett did to solve my problem, itself a testament to her humility. All I know is that the technology arrived promptly, which in turn allowed me to excel and to place me in a position that would eventually allow me to apply for a clerkship on the Supreme Court.

Sen. Amy Klobuchar, D-Minn., said Thursday that, in 1864, President Abraham Lincoln had a vacancy less than a month before the presidential election, but he waited until after the election to nominate a candidate.

It was a point initially raised by Sen. Kamala Harris, D-Calif., and one fact-checked as inaccurate, even by the left-leaning Washington Post.

“We are told that Honest Abe, the founder of the Republican Party, showed the example for why we should not be preceding on this. I think it’s worth noting that example misses a lot of the story.”

“Abraham Lincoln, in 1864, 27 days before the election, Chief Justice Roger Taney passed away,” Cruz said, noting that it was Taney who authored the infamous Dred Scott decision.

They were gone, and the Senate would not return until December. So, there was no Senate physically present to confirm that nominee. When the Senate did return in December, Abraham Lincoln nominated in December a justice to fill that seat, Salmon Chase, which the Senate confirmed the next day.

5) ‘Listen to People Who Have Had Abortions’

Crystal Good, a West Virginia poet and abortion rights activist, testified by video about getting an abortion at the age of 16. The abortion involved her high school boyfriend, but she said she faced sexual abuse at home and would not have gotten permission from her parents to get an abortion.

“Please listen to people who have had abortions. Hear us when we say, ‘Do not confirm this nominee,’” Good told the committee.

“These kind of restrictions make abortion hard to get because we have to travel, miss work or school, save up for weeks and pay out of pocket,” Good said.

She also said she used to have faith that the Supreme Court would protect abortion rights and “workplace protections for my transgender daughter.”

“With this nomination, I am losing faith,” she said. “The way I have chosen to create my family is demonized by some politicians. The reality is that we are like most families across the nations. I had an abortion. I have two sons and a daughter who is trans. I love all of them. We are a proud Afro-lachian family. That’s African-American Appalachian.”

6) ‘Goose Is Pretty Much Cooked’

In a lighter moment during the contentious hearings, Sen. Cory Booker, D-N.J., a vegan, joked that Cruz was also a vegan.

“Mr. Chairman, let me apologize upfront for this metaphor I am about to use. I know it will insult the two vegans on the committee—me and Sen. Cruz,” Booker quipped, in a jab at the senator from Texas, a state known for cattle ranches and usually associated with meat eaters.

Cruz jumped in to say, “Point of personal privilege.”

Booker responded, “I just want the people of Texas to know the truth. He is a closet vegan.”

But, as Booker explained, his joke was a preface for the metaphor that even he realized the Barrett nomination was heading toward committee confirmation.

“I recognize, Mr. Chairman, that this goose is pretty much cooked,” Booker said.