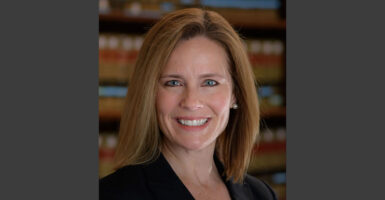 Amy Coney Barrett, a federal appeals judge for nearly three years, is a front-runner to fill the Supreme Court seat vacated by the death Friday of Justice Ruth Bader Ginsburg.

In an interview Monday morning with “Fox & Friends” on Fox News Channel and again Monday night in a speech in Ohio, President Donald Trump said that he has narrowed his list of candidates to succeed Ginsburg to four or five women. He said he likely will announce a decision Friday or Saturday.

Many pundits say they think Barrett is at the top of the president’s list. Here are six things to know about her.

1. She Made History on the 7th Circuit

The Senate confirmed Barrett to the Chicago-based U.S. Court of Appeals for the 7th Circuit on Oct. 31, 2017.

Barrett became the first and only woman from Indiana to hold a seat on that appeals court, which also covers cases in Illinois and Wisconsin.

She was on Trump’s list of 25 candidates to replace Justice Anthony Kennedy after his retirement, but the president ultimately chose another appeals judge, Brett Kavanaugh of the D.C. Circuit.

2. Scalia Was a Former Boss

“That is trial by fire. You get thrown in and it’s an overwhelming amount of work; you know, you are feeling your way, at first,” Barrett said in a February interview on “SCOTUS 101,” a weekly podcast about the Supreme Court that is produced by The Heritage Foundation.

“And the way Justice Scalia ran his chambers is we [law clerks] all had to be prepared to discuss all the cases. So we would have a conference before argument where the four of us would be in his office. And then you are just going toe to toe, everybody is saying what they think,” Barrett said, adding:

And, you know, Justice Scalia obviously [was] very quick witted, brilliant, and … he didn’t want you to agree with him, he wanted you to say what you thought. Disagreeing with him, as I sometimes did, and pushing back and going back and forth with someone like Justice Scalia really taught me a lot, taught me a lot about oral advocacy, being articulate. And who better to learn how to write under than someone who was as great a writer as he was?

3. In Football and More, She Teams With Husband

Barrett has seven children, two of them adopted from Haiti, one of whom also has  Down syndrome.

Her husband, Jesse Barrett, a former assistant U.S. attorney, also attended and graduated from the University of Notre Dame. He was editor in chief of the Notre Dame Law Review.

“In the football season, our football Saturdays are spent tailgating” with “some friends of ours for many years,” Barrett said on “SCOTUS 101.” “We had an antique, vintage fire truck that we painted green and we had tailgates where all the kids could be running around playing football out on the green.”

“At one point,” she said, “we considered moving to a neighborhood a little farther from campus and our kids really rebelled because they loved the proximity to campus too.”

She said on the podcast that she and her “very wonderful husband” balance their careers and family through teamwork.  He is now a partner at SouthBank Legal in South Bend, Indiana.

4. She Was Scolded by a Senator for Her Faith

During her confirmation hearing in September 2017 for the 7th Circuit, Barrett was questioned by Sen. Dianne Feinstein, D-Calif., about the influence of her Catholic faith.

“The dogma lives loudly within you, and that’s of concern,” Feinstein said to Barrett.

Barrett responded: “It’s never appropriate for a judge to impose that judge’s personal convictions, whether they arise from faith or anywhere else, on the law.”

5. She Has Addressed Moral Teaching and the Law

Judges shouldn’t conflate their faith with the law, Barrett wrote in a 1998 article in Notre Dame’s Law Review titled “Catholic Judges in Capital Cases” and co-authored with John Garvey.

“Judges cannot—nor should they try to—align our legal system with the Church’s moral teaching whenever the two diverge,” Barrett and Garvey wrote.

Barrett has taught law at her alma mater, the University of Notre Dame, since 2002. Her students named her “Distinguished Professor of the Year” for three different years, The Indy Star reported.

“I have taught a lot of classes. I have been a professor for a long time, so I’ve taught civil procedure and federal courts and constitutional law, seminar and statutory interpretation, one on constitutional theory, and I teach evidence,” Barrett said in the “SCOTUS 101” interview.

She received her bachelor’s degree in English literature from Rhodes College in Memphis, Tennessee, before getting her law degree from Notre Dame. She was executive editor of the Law Review.

“The same impressive intellect, character, and temperament that made Professor Barrett a successful nominee for the U.S. Court of Appeals would serve her equally well as a nominee for the nation’s highest court,” the Rev. John Jenkins, president of Notre Dame, said in a written statement.