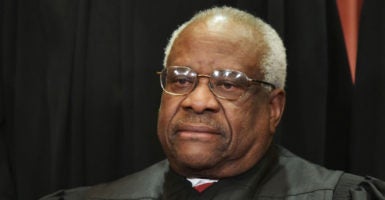 “I don’t think I know a single judge who has allowed religion to interfere with their jobs,” Justice Clarence Thomas says. (Photo: Mandel Ngan/AFP/Getty Images)

Supreme Court Justice Clarence Thomas told a friendly audience in California that religious belief does not compromise the work of the courts, and he expressed regret that religion featured prominently in a 2017 judicial confirmation.

Speaking on April 4 at Pepperdine University School of Law’s annual banquet, Thomas was asked whether it is ever legitimate to consider a candidate’s religious views during the confirmation process. The question was asked with specific reference to Democratic Sen. Dianne Feinstein of California, who suggested that Judge Amy Coney Barrett was too dogmatic for the federal bench in September 2017.

“I thought we got away from religious tests,” Thomas said. Article VI of the Constitution provides that “no religious test shall ever be required as a qualification to any office or public trust under the United States.”

“I don’t think I know a single judge who has allowed religion to interfere with their jobs,” the justice added.

Thomas is himself a Catholic who entered the seminary and studied for the cloth. He left the Catholic Church in 1968, having judged its efforts to fight racism insufficient. He returned to Catholicism in 1993 and told attendees that he goes to morning Mass before beginning his work at the high court.

“I think if you start the day on your knees you approach your job differently from when you start thinking that someone anointed you to impose your will on others,” Thomas said, emphasizing the importance of humility for judges.

Democratic lawmakers have pressed several judicial nominees about their personal religious views or associations with faith-based organizations since 2017. Though Feinstein’s exchange with Barrett, now considered a top-tier contender for the Supreme Court, is the most visible of those interchanges, others followed.

The most recent occurrence came during Judge Neomi Rao’s confirmation hearing for the U.S. Court of Appeals for the District of Columbia Circuit on Feb. 5. Democratic Sen. Cory Booker of New Jersey, who is seeking the party’s presidential nomination, asked Rao whether she believes same-sex relationships are sinful. The question came during a line of inquiry as to Rao’s views about Lawrence v. Texas, a 2003 case in which the Supreme Court struck down state anti-sodomy laws.

Rao was confirmed to the D.C. Circuit on March 13.

A similar incident arose late in 2018, when Democratic Sens. Mazie Hirono of Hawaii and Kamala Harris of California asked Omaha lawyer Brian Buescher about his affiliation with the Knights of Columbus, which they characterized as an “all male society” that “has taken a number of extreme positions” on social questions.

The Knights are a fraternal benefit society that embraces the Catholic faith in all particulars, including its social teachings. Contemporary Knights leadership has, for example, endorsed pro-life efforts and opposed same-sex marriage. Historically, the Knights were also associated with pro-labor and anti-racism causes.

Buescher is a nominee to the federal trial court in Nebraska. The Senate Judiciary Committee advanced his nomination to the floor on a party-line vote.

Thomas disclaimed any interest in retirement during his remarks at the Pepperdine banquet. Now 70, the justice was thought to be contemplating retirement under President Donald Trump.