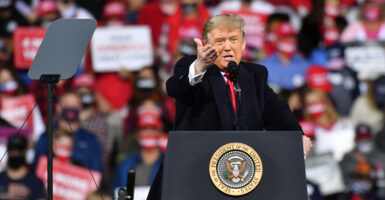 President Donald Trump speaks at a campaign rally in Fayetteville, North Carolina, on Sept. 19. In his remarks, he said, "As we meet tonight, our nation mourns the loss of a legal giant, Supreme Court Justice Ruth Bader Ginsburg." (Photo: Peter Zay/Anadolu Agency/Getty Images)

President Donald Trump said Monday morning that he will announce his nominee for the Supreme Court either Friday or Saturday, and has narrowed the list of contenders to five.

In an interview on Fox News Channel’s “Fox & Friends,” Trump said the short delay was intended to allow time to pay respects to Justice Ruth Bader Ginsburg, who died Friday at age 87.

He didn’t deny that any of them was on his short list of five potential nominees, but declined to say specifically who the five are.

“The final [Senate] vote should be taken, frankly, before the election,” Trump said.

The postponement till Friday or Saturday would result in the announcement coming after memorial services for Ginsburg, the president said.

“I think it will be on Friday or Saturday, and we want to pay respects. It looks like we will have services on Thursday or Friday, as I understand it, and I think we should, with all due respect for Justice Ginsburg, wait for services to be over,” he said.

“No matter how you would look at it, these are the finest people in the nation—young people, pretty young for the most part,” the president said, adding: “These are the smartest people, the smartest young people. You like to go young, because they’re there for a long time.”

In an interview Sunday with ABC News, House Speaker Nancy Pelosi, D-Calif., seemed open to the idea of impeaching Trump again as a means to slow down the Supreme Court nomination process.

“I heard if I [nominate], they’re going to impeach me, so they’re impeaching me for what constitutionally I have to do,” he said, later adding, “If they do it, I think my [job approval] numbers will go up.”