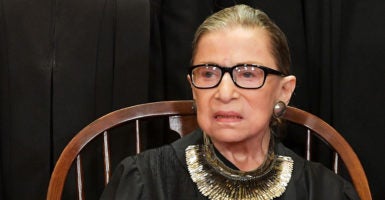 The announcement came less than three weeks after the Supreme Court issued a statement regarding Ginsburg having a procedure to remove from her left lung cancerous nodules, which had been discovered when she was treated for broken ribs following a fall in November.

Court spokeswoman Kathy Arberg issued a statement on Friday indicating Ginsburg’s recovery is “on track” and that “[p]ost-surgery evaluation indicates no evidence of remaining disease, and no further treatment is required.”

News outlets are reporting that Ginsburg will be absent from oral arguments next week as well. Those headlines have caused a flurry of speculation from fan and foe alike, but it is important to put this absence into context of Supreme Court history.

It’s common for justices to recuse themselves from participating in cases for a variety of reasons. For example, they might have a financial stake in the litigation. Indeed, Justice Samuel Alito just “unrecused” himself from a case after selling off stocks in one of the parties.

They could have previously participated in the case as a litigant; for example, Justice Elena Kagan’s previous post as the solicitor general of the United States under President Barack Obama led to her recusal in a number of cases in her first few years on the bench.

They also may have ruled on the case as a lower court judge, as we’ve seen with newcomers Justices Neil Gorsuch and Brett Kavanaugh.

In all these instances, recusal is expected in the interest of justice and fairness.

Ginsburg is not recused, however, from the cases argued this week. She will still participate—just not in person. Roberts explained on Monday that she will review the briefs and the transcripts of oral arguments before casting her vote.

While a justice’s absence is not ideal, the court faced a much more dire situation when then-Chief Justice William Rehnquist missed 44 oral arguments throughout the 2004-2005 term while he underwent thyroid cancer treatments.

To put this in perspective, the court typically hears between 65 and 75 cases per term. During his absence, Rehnquist reviewed the briefs and transcripts, and he went on to write the majority opinion in four of those cases.

On top of that, the chief justice has a number of duties dealing with the administration of the federal judiciary that an associate justice, such as Ginsburg, does not.

To be sure, a nine-member court is preferable, but the court managed with eight members for nearly 14 months after Justice Antonin Scalia’s sudden passing in February 2016.

The main impact was that the court tended to shy away from taking up any new cases raising particularly contentious issues (and, of course, the vacancy had a bit of an effect on the 2016 presidential election).

But of the cases resolved by the eight-member court, only a handful of decisions ended up tying 4-4.

Going further back in Supreme Court history, Justice Robert Jackson took a yearlong leave of absence to serve as the chief prosecutor of the Nuremberg trials in 1945-1946.

This is all to say that absences are not unprecedented for members of the Supreme Court. They are, however, extremely unusual for Ginsburg. This week marked the first time in her 25-year tenure on the Supreme Court that she missed an oral argument, including when she previously battled cancer in 1999 and 2009, and when her beloved husband, Marty, died in 2010.

It’s also important to note that, while oral arguments receive a lot of attention from the media, they are a small part in the long life of a Supreme Court case. The justices review briefs prepared by the litigants, “friend of the court” briefs filed by other interested parties, lower court opinions, and relevant past Supreme Court opinions.

Ultimately, their decisions are based on much more than an hour of oral arguments. That’s one reason Justice Clarence Thomas has cited for why he does not typically ask questions during oral arguments. Indeed, he has suggested he would eliminate oral arguments if he could.

Few would go that far, but Ginsburg’s absence from oral arguments is not devastating to the integrity of the court by any means.

Even so, Ginsburg’s absence draws great speculation. Whispers that the Trump administration is actively vetting candidates for her position on the high court are heard around Washington, which is still recovering from the bruising Kavanaugh confirmation.

This administration is, perhaps, better prepared to nominate another Supreme Court justice should a vacancy arise than a typical administration. That’s because President Donald Trump already seriously considered several candidates for the past two vacancies (including 7th Circuit Judge Amy Coney Barrett and 3rd Circuit Judge Thomas Hardiman), and there are plenty of other options on his highly publicized Supreme Court shortlist.

At this point, however, we shouldn’t read too much into Ginsburg’s absence, and instead, we should wish her a speedy recovery.