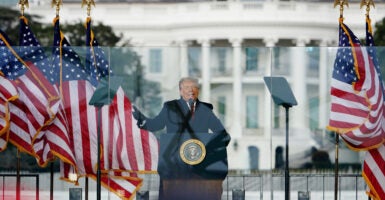 President Donald Trump addresses supporters from The Ellipse near the White House on Tuesday. Tens of thousands of Trump supporters, fueled by his claims of election fraud, flooded the nation's capital, protesting the expected certification by Congress on Tuesday of Joe Biden's presidential victory. (Photo: Mandel Ngan/Agence France-Presse/Getty Images)

President Donald Trump insisted Wednesday that he “won a landslide” election in 2020 before a crowd of more than 100,000 supporters gathered in Washington ahead of Congress’ joint session to certify the Electoral College vote count.

Trump also said he would be “disappointed” in Vice President Mike Pence if he lacked the “courage” to disqualify electoral votes the president considered corrupted.

“We will never give up. We will never concede. It doesn’t happen. You don’t concede when there is theft involved,” Trump said at the “Save America Rally.” He later added, in reference to former Vice President Joe Biden, “We’ll have an illegitimate president. We can’t let that happen.”

After his speech, the supporters walked to the Capitol in the “March for Trump.”

“This is the most corrupt election in the history of America, maybe the world,” Trump said.

The president continued to put pressure on Pence, who was presiding over the counting of the electoral votes. Trump and many his supporters contend the vice president has the authority to disqualify certain electoral votes. In December, the Electoral College gave Biden 306 votes and gave Trump 232.

“If Mike Pence does the right thing, we win the election,” he said.

“Republicans are constantly fighting like a boxer with his hands tied behind his back,” Trump said. “We want to be so nice. We want to be so respectful of everybody, including bad people. We are going to have to fight much harder, and Mike Pence is going to have to come through for us. And if he doesn’t, that will be a sad day for our country, because you are sworn to uphold our Constitution.”

Trump later added that if Pence didn’t step up, “I’m going to be very disappointed in you.”

Pence released a letter Wednesday to lawmakers, stating, “It is my considered judgment that my oath to support and defend the Constitution constrains me from claiming unilateral authority to determine which electoral votes should be counted and which should not.”

Trump also noted that he appointed three justices to the Supreme Court, yet the high court has rejected his campaign’s election challenges. He also pointed out that he appointed Attorney General William Barr, but noted that Barr, who has since retired, wasn’t investigating the fraud.

“Republicans have to get tougher. You’re not going to have a Republican Party if you don’t get tougher,” Trump said. “… I hope Mike [Pence] has the courage to do what he has to do. I hope he doesn’t listen to the RINOs and the stupid people that he’s listening to.”

RINO is an pejorative acronym for “Republican in name only.”

In Congress, more than 100 House Republicans are expected to support objections to the Electoral College vote count, and at least 13 Republicans senators are set to support them. That will force the joint session to adjourn, and both the House and Senate will be required to separately debate the objections.

“We’re going to see whether or not we have great and courageous leaders, or whether or not we have leaders that should be ashamed of themselves throughout history, throughout eternity,” Trump said. “You know what? If they do the wrong thing, we should never, ever forget what they did. With only three of the seven states in question, we win the presidency of the United States.”

Trump noted that after Democratic victories Tuesday in Georgia Senate runoffs handing control of the Senate to the Democrats, along with the House, “It’s much more important today” than before to have a Republican president.

Trump led in most battleground states through election night, often by hundreds of thousands of votes, but the tide flipped in the early hours of the next morning, prompting suspicions of vote fraud from Trump and his supporters.

“Local officials, state officials, almost all Democrats, made illegal and unconstitutional changes to election procedures without the mandated approvals by the state legislatures that these changes paved the way for fraud on a scale never seen before,” the president said.

The president talked about how dead people were recorded as having voted in the challenged states, as well as people living outside those states, and how backdated ballots and other suspicious votes were cast.

Trump called for Congress to pass sweeping election-security reforms to prevent voter fraud in the future, such as restriction on ballot harvesting, preventing non-citizen voting, and requiring voter ID.

Trump said the movement was about “truth and justice,” and said of America: “Despite everything, the best is yet to come.”