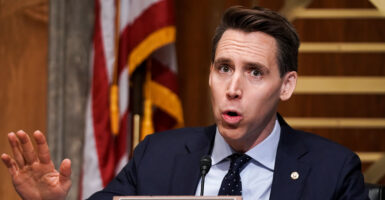 The House and Senate are poised to debate a presidential election outcome for only the third time since 1887, when Congress passed the Electoral Count Act.

The prospect comes amid litigation that seeks to force the hand of Vice President Mike Pence ahead of the Jan. 6 joint session of Congress to finalize the election results.

It also comes just one week from the day that is supposed to cap off the controversial election of 2020, although it’s highly improbable the outcome will change and that President Donald Trump will prevail against his Democratic challenger, former Vice President Joe Biden.

Sen. Josh Hawley, R-Mo., announced Wednesday that he will object to the counting of the electoral votes from certain states. Hawley’s move ensures that House objections led by Rep. Mo Brooks, R-Ala., will be debated separately in the House and Senate.

At the same time, Rep. Louie Gohmert, R-Texas, and 11 Republican alternative electors from Arizona sued over the issue in the U.S. District Court for the Eastern District of Texas.

The suit calls for Pence, in his role as president of the Senate and presiding officer of the joint session, to reject Electoral College votes from states where voter fraud or irregularities are suspected.

“I cannot vote to certify the Electoral College results on January 6 without raising the fact that some states, particularly Pennsylvania, failed to follow their own state election laws,” Hawley said in a public statement, adding:

And I cannot vote to certify without pointing out the unprecedented effort of mega corporations, including Facebook and Twitter, to interfere in this election, in support of Joe Biden. At the very least, Congress should investigate allegations of voter fraud and adopt measures to secure the integrity of our elections. But Congress has so far failed to act.

Later in the day, Walmart tweeted a reply to Hawley with the hashtag #soreloser. The tweet no longer is posted, but Hawley responded on Twitter with a screenshot and a criticism of his own.

What the Law Says Should Happen

The Electoral Count Act of 1887 requires a joint session of Congress to count the Electoral College votes from each state and stipulates that the vice president, as presiding officer, will certify the results.

The Gohmert-led lawsuit argues in part that the 1887 law is unconstitutional, contending that the Constitution grants the vice president the exclusive authority and sole discretion in determining which electoral votes to count.

The lawsuit argues that legitimizing electoral votes would be a violation of the Constitution’s Electors Clause and limit or eliminate the vice president’s 12th Amendment authority to determine which slates of electors should be counted.

Article II of the Constitution and the 12th Amendment say the president of the Senate (in this case Pence) shall, in the presence of the Senate and House, “open all the certificates, and the Votes shall then be counted.”

“For the sake of the future of our republic, come January 6th, Vice President Pence must be authorized to uphold the legal votes of millions of Americans and preserve our nation’s great experiment in self-governance,” Gohmert said in a public statement.

Pence declined to sign onto the Gohmert push to use his position to reject certain electors, according to the lawsuit.

On Tuesday, U.S. District Court Judge Jeremy Kernodle called for Pence to provide a response to the lawsuit by 5 p.m. Dec. 31, and for Gohmert to issue a reply to Pence by 9 a.m. Jan. 1.

Gohmert asked the judge for an expedited decision by Jan. 4 to allow for an appeal before Congress convenes in the joint session next Wednesday.

“The truth is that no court so far has had the morality and courage to allow evidence of fraud to be introduced in front of it,” Gohmert said, adding:

We continue to hold out hope that there is a federal judge who understands that the fraud that stole this election will mean the end of our republic, and this suit would insure that the vice president will only accept electors legitimately and legally elected. There must be an opportunity for a day in court when fraud was this prevalent.

Hawley Isn’t the Only Senator in Play

Senate Republican leaders reportedly have discouraged their caucus from signing onto a challenge of the Electoral College vote. But with the move by Hawley—mentioned as a potential presidential contender for 2024—other GOP senators likely will follow suit.

Already, Sens. Rand Paul of Kentucky and Ron Johnson of Wisconsin have said they were open to joining objections. Another Republican, Sen.-elect Tommy Tuberville of Alabama, indicated he will likely sign onto a challenge.

Their objections won’t change the election outcome, said Hans von Spakovsky, senior legal fellow at The Heritage Foundation. However, he said, the objections could bring issues to light for debate.

“They can file an objection, but there is little chance it will be sustained in either chamber,” von Spakovsky told The Daily Signal. “This could bring issues to the attention of folks about what happened.”

Since passage of the 1887 law, only two objections to an Electoral College vote managed to gain the support of a member of the House and Senate, forcing a debate in both chambers. The joint session coming up Wednesday will mark the first such debate when the House and Senate are controlled by different parties.

Most recently, on Jan. 6, 2005, Democrats alleged voting irregularities in Ohio after President George W. Bush won reelection in the 2004 election over his Democratic challenger, Sen. John Kerry of Massachusetts.

Then-Rep. Stephanie Tubbs Jones, D-Ohio, and then-Sen. Barbara Boxer, D-Calif., objected in writing to Ohio’s electoral votes for Bush. Boxer called her 2005 objection her proudest moment on the Senate floor, according to CNN.

Both chambers withdrew to consider the objection and then, in separate votes, the House and Senate each rejected the objection. The Senate voted 74-1 against the challenge, the House 267-31.

At the time, Republicans controlled both the House and Senate.

“The members of Congress who have brought this challenge are speaking up for their aggrieved constituents, many of whom may have been disenfranchised in this process,” Pelosi said at the time.

“This is their only opportunity to have this debate while the country is listening, and it is appropriate to do so. If there were other venues of this caliber, we would have taken that opportunity,” Pelosi, now House speaker again, said in 2005. “But this is the opportunity. We have a responsibility to take advantage of it.”

On Jan. 6, 1969, then-Rep. James O’Hara, D-Mich., and then-Sen. Edmund S. Muskie, D-Maine, objected in writing to counting the vote of a faithless elector from North Carolina who voted for Wallace even though Nixon had won the state.

At the time, Democrats controlled both the House and Senate. When the joint session resumed, the challenged electoral vote was counted for Wallace, a former Democrat, who won a total of 46 electoral votes after carrying five states.

In several other joint sessions to count electoral votes—including on Jan. 6, 2017—House members made objections but failed to get a Senate sponsor.

Origins of the Law

Congress passed the Electoral Count Act of 1887 in part as a response to the 1876 election stalemate, when four states—South Carolina, Florida, Louisiana, and Oregon—sent competing sets of electors.

Congress first appointed an Electoral Commission to determine the winner between Republican Rutherford B. Hayes and Democrat Samuel Tilden. But the House and Senate each had to vote to certify the commission’s verdict that Hayes won.

The prolonged election was decided in March 1877, when Congress, as now, was split between a Republican Senate and Democrat House.

The House played a constitutional role in deciding the disputed presidential election outcomes of 1800 and 1824. The Supreme Court settled the dispute in 2000 over Florida’s electoral votes.

Whether the House and Senate debate each state individually or as a package depends on how the objection is written, von Spakovsky said.

It doesn’t seem likely that Pence would have the authority as the Senate’s presiding officer to reject electoral votes, von Spakovsky said, but he had not studied the Gohmert lawsuit.

“The way the statute reads, the vice president’s role is ministerial and he doesn’t have executive authority to reject the count,” von Spakovsky said.