A Reprise of 1876? Liberal Academic Group Predicts Electoral Showdown for 2020 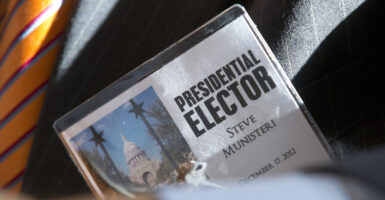 Some liberal activists are fearful of another presidential election in November in which the Democrat wins the popular vote, but the Republican wins the Electoral College and the presidency. Pictured: Texas Republican members of the Electoral College vote for the presidential ticket of Mitt Romney and Paul Ryan in 2012 at the Texas Capitol in Austin. (Photo: Robert Daemmrich/Corbis/Getty Images)

Dystopian tales are typically based in some time far into the future and feature fictional characters.

More recently, a group of academics and politicos calling itself the Transition Integrity Project detailed some shocking scenarios of what they think could happen after the 2020 election.

Whether intentional or not, one of the group’s scenarios actually has historical precedent from the 1876 election, and in part from the 1800 and 1824 elections, as detailed in my book “Tainted by Suspicion: The Secret Deals and Electoral Chaos of Disputed Presidential Elections.” The book describes four presidential contests litigated long after Election Day, either in Congress or the courts.

That’s almost identical to the 1876 clash between Republican nominee Rutherford B. Hayes and Democratic standard-bearer Samuel Tilden, which led to a political battle almost up until Inauguration Day, which back then was on March 4, rather than on Jan. 20.

Then as now, there was a Democrat-controlled House and a Republican-controlled Senate.

For those who recall the 2000 presidential race—Republican George W. Bush versus Democrat Al Gore—in which the Supreme Court settled the dispute between them over Florida’s electoral votes, the assumption might be that a postelection dispute would be settled in court. But the 2000 battle was a historical anomaly, as three other disputed outcomes were decided in Congress.

One of the project’s 2020 “war games” has former Vice President Joe Biden winning the popular vote, but Trump winning the Electoral College.

Podesta, playing the role of Biden, refuses to concede the race and claims “voter suppression.” The party persuades Democratic governors in states Trump carried to send Democratic electors to the Electoral College.

The project’s scenario says the Democratic majority in the House would unilaterally name the Democrat president, but the Republican-controlled Senate would recognize the incumbent president. Under the Constitution, the House is authorized to decide the presidency if no candidate has a majority of Electoral College votes, as happened in 1800 and 1824.

As an aside to this hypothetical scenario, California, Oregon, and Washington threaten to secede from the union if Trump becomes president for a second term.

In 1876, the country was barely a decade removed from the Civil War and seemed to begin the year with the goodwill of patriotically celebrating the centennial of the Declaration of Independence.

However, growing Northern fatigue with Reconstruction in the South and a string of scandals in the administration of President Ulysses S. Grant, a Republican, presented an opportunity for the Democrats to recapture the White House.

Most historians today think it’s difficult to know who really won the popular vote because of the mass voter suppression in the South of freed slaves, as Democrats used lynching and riots to scare blacks away from voting.

Aware of reports of Democrats voting twice and shredding other ballots, Republican Party operative Daniel Sickles telegraphed the Republican governors of South Carolina, Florida, and Louisiana to say, “With your state sure for Hayes, he is elected. Hold your state.” South Carolina Gov. Daniel Chamberlain was first to respond on a telegraph, “All right. South Carolina is for Hayes. Need more troops.”

Three days after the election, Nov. 10, Grant told Gen. William Tecumseh Sherman, commanding federal troops in Florida and Louisiana: “Either party can afford to be disappointed by the result, but the country cannot afford to have the result tainted by suspicion of illegal or false returns.”

Hayes carried Oregon. But, to stir mischief, Oregon’s Democratic governor, La Fayette Grover, named one elector for Tilden after a Republican elector was disqualified. He used a DNC legal opinion as a rational.

The 1876 dispute was different from those of 1800 and 1824, when no candidate had a majority of votes in the Electoral College.

However, in 1876, the question wasn’t what candidate had a majority of the Electoral College vote, but about states providing competing returns, or parallel pictures of who won the states. So, it wasn’t just up to the House.

The Republican-controlled Senate and Democrat-run House established a 15-member commission with five House members, five senators, and five U.S. Supreme Court justices. With a Republican edge, the commission decided each disputed state by a 8-7 vote in favor of Hayes.

The result still had to be certified by both houses of Congress, and the Democratic House wasn’t going to give up easily, facing immense pressure from constituents.

The Transition Integrity Project predicts the potential for violence after the 2020 presidential contest. There were certainly threats of violence in 1876.

Angry Democratic mobs across the country held rallies, chanting “Tilden or blood,” and in a dozen states, club-wielding “Tilden Minutemen” had formed, threatening to march into Washington to take the White House for their candidate.

Tilden himself discouraged that. Joseph Pulitzer, a Democratic partisan still building a vast newspaper empire at the time, called for 100,000 people “fully armed and ready for business” to ensure that Tilden became president.

They had more time in those days to settle election disputes, as presidents weren’t inaugurated until March.

They agreed to end Reconstruction, appointing a Southern Democrat to the Hayes Cabinet, as well as provide federal money for Southern infrastructure projects. Hayes also agreed to serve only one term.

A potential second civil war was averted. Hayes believed better infrastructure in the South would help heal racial divisions through economic growth. He had also considered a bipartisan Cabinet, given the closeness of the election.

But the legacy of the 1876 compromise was the abrupt end to Reconstruction, which allowed generations of racist laws and what amounted to a caste system in the South for about 90 more years before federal civil rights laws.

Hayes shouldn’t get all the blame for that, as a Tilden administration almost surely would have made matters worse in the South. Also, public sentiment in the North had turned sharply against Reconstruction. Had Hayes won outright, it might have had a more orderly wind-down, but likely would have ended.

The bigger point in the present context is that should the country face a disputed election in 2020, there is a precedent to turn to, aside from the Supreme Court. It was a messy precedent in 1876, but ultimately most closely resembles what the Transition Integrity Project is expecting from 2020.