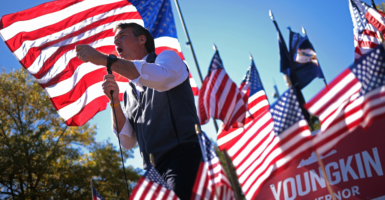 “You work for the people,” a former school board member reminds others who hold that elected office. Pictured: Republican gubernatorial candidate Glenn Youngkin speaks Oct. 19 during a rally in Stafford, Virginia. (Photo: Win McNamee/Getty Images)

Parent activists, school board members, and a congressman gathered Monday in Washington to remind Attorney General Merrick Garland and the Justice Department that the fight for education is only just beginning.

Good warned that parents are not going to stand down or “be quieted,” calling for parents to continue fighting for their children by “standing in the gap” when the state or federal government errs.

“One of the things I’ve advocated for is cameras in the classrooms,” Good said, adding:

Parents ought to be able to look at the classroom at any time and see what’s happening in their school systems. Congress has given over $200 billion in funding to the school systems because of the virus and the pandemic, when they only asked for $25 billion from the CDC [Centers for Disease Control and Prevention] to safely reopen. Let’s use some of that money to have greater transparency in the classrooms.

In an Oct. 4 memo criticized by countless parents, Garland directed the Justice Department and the FBI to investigate parents who allegedly threatened violence against public school officials.

Republican Glenn Youngkin’s Nov. 2 defeat of his Democratic opponent, Terry McAuliffe, in the Virginia governor’s race has been widely attributed to parental outrage at increasingly radical school policies in that state and across the nation. Virginia Republicans also swept statewide races for lieutenant governor and attorney general and retook control of the House of Delegates in the General Assembly.

At a Youngkin rally in Loudoun County the night before the election, many parents told The Daily Signal that they support Youngkin out of a desire to retain more control over their children’s education and to avoid the pitfalls of progressive education, such as critical race theory and explicit sex and gender education.

But parent activists from Utah, Arizona, Florida, and several other states told The Daily Signal at the FreedomWorks press conference that progressive school board members are not backing down in the face of these parental rebellions—they are fighting back even harder.

“I feel like they are gearing up more,” said Angelique Contreras, a school activist in Palm Beach, Florida.

“They bring 20 police to one person to every school board meeting,” Contreras said. “We’ve had multiple people arrested just for showing up. In the interim, it’s actually the school boards that are treating parents and putting fear into the parents not to show up. … They are leading with that aggression towards the parents, and it’s been really, really bad.”

“Find your voice,” urged Pam Kirby, a former member of the Governing Board of Arizona’s Scottsdale Unified School District.

A member of that school board compiled an “online dossier” on parents that included personal photos, Social Security numbers, one parent’s divorce proceedings, and financial records, The Daily Caller reported.

“This is just one of many examples of bad behavior we are seeing from power hungry school board members across the country,” said Kirby, who also serves as first vice chairman of the Arizona Republican Party.

Kirby insisted that the majority of the nation’s school board members want to serve families, but are bullied by the teachers unions, the superintendents, and the school board associations.

“I am calling on those school board members who want to do the right thing to find your voice,” she said. “It’s time for you to tell the NSBA [National School Boards Association]  and your state school board associations that you will no longer submit to their indoctrination. You do not work for the superintendents, you are not the cheerleader for the institutions. You work for the people.”

The Arizona school board member also called on parents to remind members of their school boards that they are using tax dollars for their membership dues for state associations and the National School Boards Association.

“Tell them that you will no longer allow them to fund the institutions that are eroding your parental rights,” Kirby said.

Kirby highlighted the launch last month of the Arizona Coalition of School Board Members, an organization that promises to “provide training and resources to school board members, candidates, parents, and communities across Arizona rooted in the priorities of educational freedom, parental rights, and academic excellence.”

“If you are a board member who finds that your state association and the National School Boards Association are unworthy of your continued support, don’t be intimidated,” Kirby said. “Revoke your association memberships today and stand shoulder to shoulder with your parents and your community. And focus on who is important: the kids.”