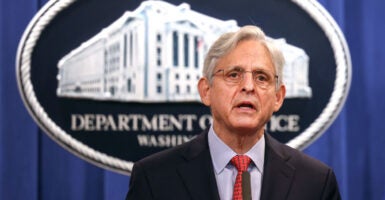 Attorney General Merrick Garland says he is directing the FBI to work with each U.S. attorney and leaders “in each federal judicial district” to discuss strategy to address "threats of violence against school administrators, board members, teachers, and staff.” Pictured: Garland speaks during a news conference Aug. 5, 2021. (Photo: Kevin Dietsch/Getty Images)

Attorney General Merrick Garland called on the FBI to “use its authority” against parents who threaten or use violence against public school officials in a Monday memorandum.

Garland said there has been a “disturbing spike in harassment, intimidation, and threats of violence against school administrators, board members, teachers, and staff.” He said he is directing the FBI to work with each U.S. attorney and leaders “in each federal judicial district” to discuss strategy to address threats within 30 days of his statement.

The Department of Justice’s memorandum did not specify what it classifies as a crime and did not immediately respond to The Daily Caller News Foundation’s request for clarification on the matter.

Garland’s statement follows a letter from the National School Boards Association that asked the federal government to get involved in the “immediate threat” of violence from parents faced by American public schools and its education officials. The National School Boards Association said the incidents could be “the equivalent to a form of domestic terrorism and hate crimes.”

“It is shameful that activists are weaponizing the U.S. Department of Justice against parents,” Nicole Neily, president of Parents Defending Education, told The Daily Caller News Foundation in response to the memorandum. “This is a coordinated attempt to intimidate dissenting voices in the debates surrounding America’s underperforming K-12 education—and it will not succeed. We will not be silenced.”

The letter follows the National School Board Association’s request to classify protests as “domestic terrorism.” pic.twitter.com/NhPU03YOYq

The Department of Justice said it takes instances of threats or violence against school officials “seriously and is committed to using its authority and resources” to discourage, identify, and prosecute the “rise in criminal conduct directed toward school personnel.”

Parents have led the charge against controversial issues such as critical race theory, masking mandates, and vaccine requirements.

In Loudoun County, Virginia, two parents were arrested in June for trespassing while protesting critical race theory and a transgender policy at the school district because they refused to leave the rowdy meeting that was declared an unlawful assembly. In July, a man was arrested at a school board meeting and charged with a felony because a gun reportedly fell out of his pocket, the Indianapolis Star reported.

“In the coming days, the Department will announce a series of measures designed to address the rise in criminal conduct toward school personnel,” the memorandum said.

It “will also create specialized training and guidance for local school boards and school administrators,” the Justice Department press release said. “This training will help school board members and other potential victims understand the type of behavior that constitutes threats, how to report threatening conduct to the appropriate law enforcement agencies, and how to capture and preserve evidence of threatening conduct to aid in the investigation and prosecution of these crimes.”