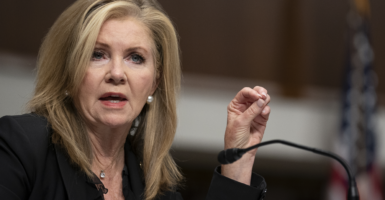 Attorney General Merrick Garland should resign or be fired or impeached for unleashing the FBI on public school parents, Sen. Marsha Blackburn, R-Tenn., told The Daily Signal in an interview.

“And Merrick Garland wants the FBI and the U.S. attorney’s offices to focus on parents that go to a school board meeting to ask questions about mandates on their children, curriculums affecting their children, and the safety of their children during the academic day,” she said.

The Washington Free Beacon reported last week that the National School Boards Association collaborated with the White House before it sent the letter to the president. And days before Garland issued his memo, the White House asked the National School Boards Association for examples of threats of violence and harm to school board members, the Free Beacon reported.

“I do think that director of schools Scott Ziegler, over there in Loudoun County, that he should be fired,” Blackburn told The Daily Signal. “I think that Merrick Garland should be removed from his position.”

Blackburn also called for the removal of the National School Boards Association chairman responsible for the association’s letter to Biden.

Earlier this month, Cardona appointed Garcia, one of the signers of the Sept. 29 letter, to the federal board that oversees student progress.

“Every single one of them ought to be removed,” Blackburn insisted to The Daily Signal, referring to Garcia, Ziegler, and Garland.

“Our children deserve our best efforts,” the Tennessee Republican told The Daily Signal. “They deserve our work. Our work is to educate them. It is imperative that parents know that their children are going to be looked after, cared for, educated and they will be in a safe environment.”

Blackburn and Sen. Ben Sasse, R-Neb., led members of the Senate Judiciary Committee on Wednesday in sending a letter requesting the evidence of threats Garland used when he drafted the memo instructing Justice Department lawyers and the FBI to look into parents’ disagreements with local school boards.

“Please provide all evidence you personally used or relied on between Wednesday September 29, 2021, and Monday, October 4, 2021–other than the content of the NSBA letter dated Wednesday September 29–that formed the basis for the memo issued by the Department of Justice dated Monday October 4th,” the letter said.

The letter, which requests a response from Garland by this Monday, continued:

Because you were able to distill your evidence and craft a memo that fixed the gaze of the FBI directly on concerned parents across this country in just four days, you should be able to share that evidence with us in the same period of time.

Blackburn told The Daily Signal that she expects to receive timely answers to her questions.

“The closest he came was saying that the memo reflected his position,” she said, “and he says he relied on the NSBA letter, and that is the document in which the parents were called domestic terrorists.”

“It is something that I have never in my life heard of,” the senator said, laughing incredulously.

Blackburn said that memos from liberal U.S. attorney’s offices across the nation outline 13 different federal statutes that local law enforcement can use to “shut up” or “shut down” concerned citizens.

“It could be for telephone calls,” she said. “It could be for online internet conversations or Facebook postings. It could be because you’re organizing friends and neighbors to attend a school board meeting.”

Blackburn pointed out that parents elect school board members to represent them and to make sure their children are educated.

“But now the parents are being told you can’t do that,” she said. “So let’s bear in mind that this is why parents are showing up [at school board meetings]. They’re saying, no, we want to know what is happening with our children.”