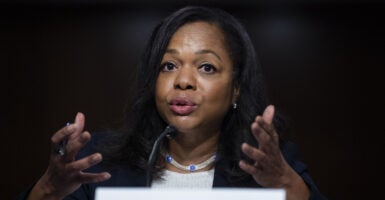 “While this is not a matter that the Civil Rights Division would handle, I know the [Justice] Department is committed to ensuring robust civil discourse,” Assistant Attorney General Kristen Clarke testifies Wednesday to the Senate Judiciary Committee when asked about using anti-terrorism laws against parents who speak out on school matters. (Photo: Tom Williams/CQ-Roll Call/Getty Images)

Two Senate Republicans tangled Wednesday with one of Attorney General Merrick Garland’s key deputies over her boss’ proposal to use federal anti-terrorism laws against parents who speak out against critical race theory, mask mandates, or other contested issues in their public school systems.

The order has drawn fire, especially from conservatives, as an attempt to intimidate or silence parents who express their views to local school boards.

Clarke said her division at the Justice Department, the Civil Rights Division, doesn’t deal with the issue, but that she is aware of Garland’s order.

“I’m aware of the memorandum from the attorney general, which speaks to threats and intimidation that some school officials have experienced in our country. That’s not activity protected by the First Amendment,” Clarke said.

Blackburn followed by asking: “So you are saying that a parent going to a school board and expressing their dismay with CRT [critical race theory] or with a mask mandate is not protected speech?”

Clarke: “I believe the attorney general’s memorandum deals with threats and intimidation and harassment.”

Blackburn: “Did DOJ issue the directive to the FBI to target parents in direct response to this letter from the teachers union? Yes or no?”

Blackburn apparently was referring to a Sept. 29 letter to President Joe Biden from the National School Boards Association urging him to use federal laws to combat terrorism as tools against outspoken parents at school board meetings.

“Again, this is not a matter that the division handled,” Clarke replied, referring to the Civil Rights Division she heads. “But, what I can tell you is that the attorney general said threats against public servants are not only illegal, they run counter to our nation’s core values.”

Blackburn then asked: “Do you believe it’s appropriate to treat parents as domestic terrorists for daring to ask elected school board members questions about what is being taught to their children?”

Clarke responded: “While this is not a matter that the Civil Rights Division would handle, I know the department is committed to ensuring robust civil discourse.”

The assistant attorney general responded that she cannot talk about Justice Department deliberations.

Cruz: “Do you believe Antifa are domestic terrorists?”

Clarke: “I don’t have a view about Antifa.”

Cruz: “Do you believe the Black Lives Matter protesters who burned shops, who firebombed police cars, who murdered police officers, do you think they are domestic terrorists?”

Clarke: “Senator, I believe we live in a society where people espouse different views.”

“It’s amazing. You are not going to condemn people who are murdering police officers and firebombing police cities, because your politics align with them,” Cruz said.

“But at the same time, when it comes to parents at school boards, you are perfectly comfortable with calling a mom at a PTA meeting a domestic terrorist.”