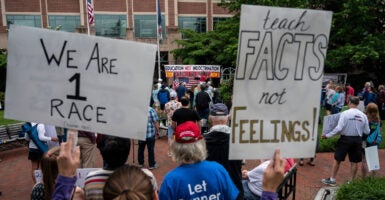 People hold up signs during a rally against critical race theory being taught in schools at the Loudoun County Government Center in Leesburg, Virginia, June 12, 2021. (Photo: Andrew Caballero-Reynolds/AFP/Getty Images)

A group representing school boards across the country asked President Joe Biden to enforce federal statutes that combat terrorism to address violence and threats directed toward school board members and public schools in a Wednesday letter.

A letter from the National School Boards Association asked the Biden administration to use statutes such as the Gun-Free School Zones Act and the USA Patriot Act to stop threats and violence directed toward school board members over actions that could be “the equivalent to a form of domestic terrorism and hate crimes,” according to the letter.

“America’s public schools and its education leaders are under an immediate threat,” the National School Boards Association wrote in the letter. The letter asks for “federal law enforcement and other assistance to deal with the growing number of threats of violence and acts of intimidation occurring across the nation.”

On top of requesting federal aid, the letter noted several other issues related to school boards, which have been battlegrounds for culture wars over mask rules, COVID-19 vaccinations, schools reopening, critical race theory, and remote learning.

“Unfortunately, it appears that the NSBA believes that parents, who are trying to get a seat at the table in order to have a say in their children’s education, are domestic terrorists,” Ian Prior, executive director of Fight for Schools, told The Daily Caller News Foundation. “It really goes to show that the educational industrial complex is not there to cooperatively work with parents to shape a premiere educational system for their children, but is rather beholden to special interests that only care about their political power.”

The letter also called on Biden to use the U.S. Postal Service “to intervene against threatening letters and cyberbullying attacks,” citing growing threats from “extremist hate organizations showing up at school board meetings.” The letter blamed “propaganda purporting the false inclusion of critical race theory within classroom instruction” for “attacks against school board members and educators.”

“This propaganda continues despite the fact that critical race theory is not taught in public schools and remains a complex law school and graduate school subject well beyond the scope of a K-12 class,” the letter added.

Education Week pressed Chip Slaven, National School Boards Association interim executive director and CEO, who said the organization’s main goals in calling for a coordinated effort between local, state, and federal law enforcement was “safety and deterrence” over incidents that “are beyond random acts.”

“What we are now seeing is a pattern of threats and violence occurring across state lines and via online platforms, which is why we need the federal government’s assistance,” Slaven told Education Week.

The letter also cited “watchlists,” which are “spreading misinformation that boards are adopting critical race theory curriculum and working to maintain online learning by haphazardly attributing it to COVID-19.”

In Loudoun County, Virginia, members of an “anti-racist” Facebook group created a list of parents and teachers to retaliate against for their anti-critical race theory stance. The online group included Beth Barts, a member of the Loudoun County School Board, which prompted an effort led by parents and community members to remove her and five of her fellow board members.

Shortly after the discovery of the Facebook group, an advisory board at Loudoun County Public Schools posted, but later deleted, social media messages that declared anti-critical race theory activists “can and will” be silenced.