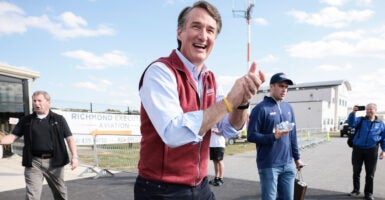 Former business executive Glenn Youngkin defeated Democrat Terry McAuliffe in the Virginia governor’s race Tuesday, becoming only the fourth Republican candidate to win the office in the past 40 years in what used to be a solidly red state.

By 9:15 p.m., Youngkin appeared to be well on his way to thwarting McAuliffe’s attempt to retake the office he left in 2018, with a strong showing in both rural and suburban areas.

After midnight, though, Youngkin’s margin had shrunk to 51% of the vote to McAuliffe’s 48.3% with about 95% of precincts reporting. He had about 1.66 million votes and McAuliffe had 1.58 million.

“We are going to embrace our parents, not ignore them,” a jubilant Youngkin told cheering supporters just after 1 a.m. Wednesday.

Dave Wasserman, editor of The Cook Political Report, called the race early for Youngkin, as did the Republican Governors Association. Media outlets, however, waited until well after midnight.

The McAuliffe-Youngkin race tightened as it was driven by culture wars in public schools across the nation, including in Virginia’s populous, affluent, and liberal Loudoun and Fairfax counties, both suburbs of Washington.

In the race for lieutenant governor, former state Del. Winsome Sears, the GOP candidate, led the Democrat, state Del. Hala Ayala, by 51% to 49% with 95% of precincts reporting. Sears, also a former Marine, will be the first black woman to win a statewide office in Virginia.

And in the race for attorney general, Virginia’s third statewide office, state Del. Jason Miyares, a Republican, narrowly led Democratic incumbent Mark Herring, who was seeking a third term, 50.8% to 49.2%.

Republicans also appeared to regain control of the Virginia House of Delegates, gaining six seats from Democrats to secure a 51-49 majority.

Youngkin took the stage at his campaign headquarters in Chantilly, Virginia, at 1:03 a.m. Wednesday to give his victory speech as Norman Greenbaum’s 1969 hit song “Spirit in the Sky” blared out of the speakers.

“We’re going to introduce choice within our public schools. How about that?” Youngkin said.

Youngkin, 54, will be the first Republican to win the governor’s mansion since Robert McDonnell in 2009. Seven of the state’s last 10 governors (including 64-year-old McAuliffe and current Gov. Ralph Northam) were Democrats.

The Virginia Constitution does not allow governors to serve consecutive four-year terms. Only two governors since 1830, William Smith and Mills Godwin, had won additional terms and late Tuesday it looked like McAuliffe would not become the third.

McAuliffe spoke to supporters for about eight minutes at the McLean Hilton in Tysons Corner beginning at 10:15 p.m., but notably did not concede, InsideNoVa reported.

“We’re still going to count all the votes because every single Virginian deserves to have their vote counted,” the Democrat said.

McAuliffe recently paid $53,000 to retain lawyer Marc Elias, who aids Democrats in high-profile election cases and has helped several Democrats win elections at the 11th hour. Some political observers saw this as a sign that the former governor was prepared to fight if the outcome were close.

“This election has demonstrated that education is a salient political issue, and one that is likely to persist for the foreseeable future,” Parents Defending Education President Nicole Neily said. “If politicians ignore it—or denigrate voters and parents—they do so at their peril.”

Free to Learn Coalition President Alleigh Marre emphasized that parents have “come together to build a united coalition that elevated K-12 education to center stage—placing value in academics over activism and safety over politics.”

“That powerful coalition’s message should be heard loud and clear by groups like the National School Boards Association and other special-interest leaders that all tried to discount the merit of parents’ frustration,” Marre said. “Parents deserve a seat at the table, because there’s nothing more important than our kids.”

Heritage Action for America’s executive director, Jessica Anderson, pointing out that Virginia long has been considered “out of reach for conservatives,” said the projected Youngkin victory “shows the lasting power of kitchen-table issues.”

“When parents see how woke policies hurt their children and their communities, they spring into action, and we saw this first hand in Virginia,” Anderson said in a written statement Tuesday night. “Elected officials across the country should take note: Americans of all political persuasions are fed up with the left’s social and cultural extremism, and they’re voting like it.”

Two sexual assaults this year at public high schools in Loudoun County, the state’s fourth-largest jurisdiction, activated many parents, who already were protesting the school system’s use of critical race theory to frame lessons.

Parents criticized the Loudoun County School Board for badly mishandling and covering up the sexual assaults, which local law enforcement concluded were committed by the same teenage boy, who reportedly wore a skirt into a girls’ restroom where the first assault occurred in May.

The school board previously was criticized for its policy on transgender students (adopted in August) and an equity plan promising “a racially conscious, identity-affirming and culturally responsive learning space for every student and employee.”

Youngkin, who initially approached hot-button cultural issues such as abortion with caution, leaned hard on McAuliffe’s comments about parents and schools.

The Republican candidate also emphasized the dangers of critical race theory and political ideology in schools, drawing on Loudoun County as the ominous example of what progressive politics will do to public schools.

“I don’t think parents should be telling schools what they should teach,” McAuliffe said during a September gubernatorial debate—a comment that proved to be highly effective marketing content for the Youngkin campaign.

“I believe parents should be in charge of their kids’ education,” Youngkin countered.

“Do you really want, parents here, sending your child to first grade where the teacher’s not vaxxed and they’re not wearing masks?” McAuliffe asked at a campaign event Monday. “Well, that’s what you get with Glenn Trumpkin.”

At a Monday night Youngkin rally in Loudoun County, many parents told The Daily Signal that they support Youngkin out of a desire to retain more control over their children’s education and to avoid the pitfalls of progressive education such as critical race theory.

“I’m Hispanic, descended from Belize but raised in America,” one father told The Daily Signal as the crowd waited for Youngkin to arrive. “I absolutely love America, so that’s why I’m here.”

“I like the fact that he’s standing up for parents,” the father explained, calling Youngkin a “believer” in God who has promised to ban critical race theory in schools.

Youngkin rose to various leadership posts over 25 years at the Washington-based equity firm The Carlyle Group, departing in 2020 as co-CEO. In his first bid for elective office, he defeated six other candidates at a state convention to become the GOP’s nominee for Virginia governor.

Born in Richmond, Youngkin attended Rice University on a basketball scholarship, graduating with bachelor’s degrees in managerial studies and mechanical engineering. He received an MBA from Harvard Business School in 1994.

An influential Democrat nationally, McAuliffe was co-chairman of President Bill Clinton’s reelection campaign in 1996, chairman of Hillary Clinton’s presidential campaign in 2008, and chairman of the Democratic National Committee from 2001 to 2005.

McAuliffe, who first made his mark as a real estate investor and developer, won the 2013 race for Virginia governor by defeating Republican Ken Cuccinelli, the state’s attorney general, as well as Libertarian Robert Sarvis. Born in Syracuse, New York, he received a bachelor’s degree from Catholic University and, in 1984, a law degree from Georgetown University Law Center.

Ken McIntyre contributed to this report, which was updated with additional reporting as returns came in.