Middle School Girl Gets Suspended for Possessing a Butter Knife 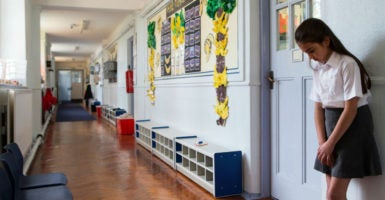 Who would have thought a butter knife could become the center of a school controversy?

To highlight the dangers of having this dull knife on campus, the police noted to state prosecutors that the girl used it to cut a peach. Such is the folly of overcriminalization: Every minor mishap gets crammed into the criminal justice system when it could be easily resolved by other means.

In defense of their daughter, the girl’s parents explained that they gave her a set of utensils “made for children to learn how to eat properly.” But despite this educational purpose behind the possession, school officials pounced when the girl brandished the short, dull, rounded utensil, cut a peach in half, and shared it with a hungry friend during lunch time in the school cafeteria.

A commonsense response? Give the girl a gold star for sharing. But instead, the county’s zero tolerance policy toward weapons required punishment.

The zero tolerance policy prohibits possession of a Class B weapon on school premises. This includes such items as razor blades, nunchakus, shotgun shells, and knives—including “blunt-bladed table knives.” Possession of these weapons is considered a criminal incident and can trigger a host of consequences, including not only a minimum six-day suspension from school, but also a mandatory report to law enforcement.

That’s failure No. 1 by the adults in the room. A student using a butter knife is not an incident that requires the time and attention of law enforcement.

And here is failure No. 2: After examining the evidence—a single butter knife—the police department turned over the investigation to the local Florida state attorney’s office, which is now weighing whether to bring criminal charges against the student.

A spokeswoman for the school district maintains that the school followed district policy throughout the incident, while pointing out that the district is working with the family of the suspended student by agreeing to reduce her suspension from six to three days. Needless to say, the family is not satisfied with the ongoing investigation and has hired a lawyer to represent them in the matter.

Surely, there must be someone along the chain of command with the requisite discretion to understand that an 11-year-old cutting a peach with a child’s butter knife is not the type of evil that a school weapons ban is intended to protect against.

The rigidness of a zero tolerance policy that requires taxpayer dollars to fund a criminal investigation into a student who simply cut a peach illustrates a systemic flaw in school discipline procedures.

Unfortunately, this is not an isolated incident, but yet another example of an overreaction to minor infractions due to a zero tolerance school weapons ban, which can have serious consequences.

In Ohio, 10th-grader Da’von Shaw gave a class presentation on how to make a healthy breakfast, which included an apple that he sliced in front of the class. Da’von received a five-day suspension for possessing a weapon on campus due to his demonstration.

In California, high school senior Brandon Cappelletti was not nearly as fortunate. He faced a misdemeanor charge after school officials discovered pocket knives left over from a family fishing trip in the console of his car, which was parked on school grounds. Cappelletti narrowly avoided expulsion due to community outrage against the disproportionate punishment.

Cappelletti’s football coach opposed the severity of potential consequences by sharing, “I’m willing to stick my neck out for these kids because they are the kind we want representing us in society … I hope their lives won’t change because of an innocent mistake.”

Criminal charges carry a multitude of collateral consequences, which could have prevented Cappelletti from following in his father’s footsteps and joining the Marines. He enlisted shortly after charges were dropped.

In all of the aforementioned incidents, schools relied on zero tolerance policies that can produce harmful and unexpected results. To be sure, schools must take weapons seriously, but in a way that requires educators to exercise discretion in evaluating what is in fact a weapon, as well as the nature of an offense.

This one-size-fits-all approach to discipline is a significant contributor to overcriminalization, which is the effort to punish every mistake and attempt to solve every problem through the use of the criminal law and penalties.

This ill-suited suspension and investigation into an 11-year-old with a butter knife is an apt opportunity for school districts and localities to use a little common sense and re-examine how to handle rules violations in a more constructive and equitable manner.