As Some Freedoms Ebb in Great Britain, Lessons for the United States 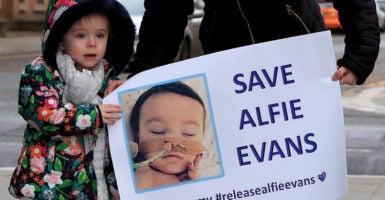 Liberty is a precious and fragile commodity.

Americans have been particularly blessed to have institutions and a culture that buttress liberty.

However, we shouldn’t lull ourselves into a false sense of security. A series of deeply concerning stories demonstrate why we should refuse to accept a growing number of sometimes small but increasingly large attacks on fundamental liberties.

Guy Benson, an editor at Townhall, a conservative commentary website, described many of the worrying incidents that have taken place in the U.K. as of late.

In response to increased stabbings, the U.K. has pursued laughable knife control policies on top of incredibly stringent gun control. It also has prosecuted citizens and handed out hefty fines for “offensive speech”—in some cases people barely escaped jail time.

The most stunning incident was, of course, the court-ordered death of Alfie Evans, a toddler who had a degenerative neurological condition.

Alfie’s parents were not only denied further medical treatment for their child, but prohibited from seeking treatment elsewhere under the court’s assumption that this was best for their son.

After five days of not receiving life support, Alfie died.

It’s hard not to think of the warning about “death panels” in the debate over socialized medicine and Obamacare. The incident sent a chilling message.

“In that way, the boy’s death illustrates, in horrifying detail, the cold logic of the mature welfare state,” wrote John Davidson of The Federalist. “The purpose of the welfare state is to exercise power over its subjects—and make no mistake, they are subjects, not citizens—and that’s it. Nothing more and nothing less.”

It’s not all bad in the United Kingdom, as the country ranks well on the Index of Economic Freedom and has recently done a good job of reasserting its sovereignty through Brexit. The U.K. shares with the United States a venerated, Anglo-Saxon legal tradition—despite the problem of occasional rogue left-wing judges—and has a significantly stronger tradition of press freedom than, say, France.

But the growth of government power, and in some cases, evisceration of individual rights in the U.K., should alarm anyone who cares about freedom.

Lest one thinks this is an exclusively British problem, the rest of the Western world is seeing similar violations of individual rights, including euthanization of the mentally ill in Belgium and the Netherlands, censorship of media in France and Europe in general, and blatant attacks on religious liberty in Canada.

In light of recent developments around the world, we may be thankful that here in America we have set our own course and specifically created a government meant to protect the concepts of both liberty and self-government.

Our Founding Fathers, the patriots of 1776, saw creeping despotism as noxious and unworthy of a free people. They didn’t stand by idly and let small-scale repression turn into greater authoritarianism.

They ultimately refused to take the crown’s petty and arbitrary laws in stride as simple inconveniences.

Instead, they rejected the idea that liberty would survive as it was taken from them piece by piece.

The Founders refused to be conditioned for tyranny.

To protect us from oppressive rule in the future, they gave us the Declaration of Independence and the Constitution, the “apple of gold” and the “frame of silver,” as Abraham Lincoln once described these documents, as unparalleled, timeless rebukes to arbitrary rule and an overreaching state.

Despite this exceptional heritage, the United States has also witnessed a slide away from the culture of liberty.

In America, we now have a relentless assault on free speech carried out on college campuses.

This effort at colleges and universities is being conducted by a small, but growing number of effective agitators, who are attempting to stamp out anything considered conservative opinion in our schools.

Some have dismissed concerns that these attacks on free speech represent a larger trend, but we have every reason to be concerned that America’s institutions of higher learning are abandoning core elements of American values.

While Americans have certainly experienced a loss of freedom in the last century, we should look at what is occurring in the U.K., Europe, and even here in our own country, and see it as a warning of something far worse on the horizon.

We’ve been given a wonderful gift of self-government, but our special civilizational inheritance doesn’t guarantee that our rights can’t be slowly stripped and peeled away, nor that a once-free people will not blithely accept it.

Ideas have consequences and institutions matter.

At the end of the day, freedom quickly dies if the American people are no longer willing to defend it.

It would be the height of hubris to think that what’s happening across the pond can’t happen here too.

Like the Founders, we too should refuse to be conditioned for tyranny.