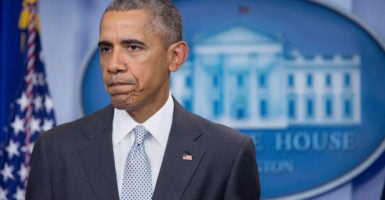 Political correctness jumped the shark long ago, and now we must simply suffer through one absurd controversy after another in the crusade to perfect society.

Attorney General Jeff Sessions got himself in hot water for saying in a speech to the National Sheriffs’ Association Monday that the position of sheriff is a part of the “Anglo-American heritage of law enforcement.”

Social justice warriors immediately denounced Sessions’ language as dog-whistling, and asserted that the attorney general was a racist for using “Anglo-American” in his speech.

“[Sessions’] decision to link the term sheriff to some part ‘of the Anglo-American heritage of law enforcement,’ is an unfortunate yet consistent aspect of the language coming out of the Department of Justice under his tenure and in the opinion of the NAACP, qualifies as the latest example of dog whistle politics,” the NAACP said in a statement.

While “Anglo-American” legal system is likely not a phrase typically used in conversation, it is a perfectly acceptable way to describe America’s common law jurisprudence as defined by the Encyclopedia Britannica.

It’s certainly applicable to the office of sheriff, which is derived from the use of the so-called “shire reeve,” a local official tasked with keeping the peace, in medieval England.
David B. Kopel wrote for Reason how successful the office of sheriff in the Anglo-American legal tradition has been:

Sessions was exactly right in praising the Anglo-American tradition of ‘the independently elected sheriff. … the people’s protector, who keeps law enforcement close to and accountable to people through the elected process.’ As in many fields of law, such as freedom of the press, American has built on its English legal foundation—taking good principles, and strengthening and extending them.

The Anglo-American legal tradition has been a blessing to humanity, one of the prime reasons that the United States, Great Britain, and a few other nations have enjoyed such success over the last two centuries. That didn’t stop the mob from twisting this innocuous phrase into something sinister.

Sessions’ accurate, factual, and what should have been a decidedly uncontroversial statement about the American legal system brought the verbal police out in force.

Other various progressives howled on Twitter, again asserting that the phrase was racist and perhaps a fireable offense.

Reminder that our Attorney General is an outright racist who wants us all to acknowledge "Anglo-American heritage." pic.twitter.com/5YL2iIl2Mv

Full-on racist! This man is so not qualified to be our nation's top law enforcer. https://t.co/OJXgIgoElR

Do you know anyone who says “Anglo-American heritage” in a sentence? What could possibly be the purpose of saying that other than to pit Americans against each other? For the chief law enforcement officer to use a dog whistle like that is appalling. Best NO vote I ever cast.

Not everyone on the left was willing to join in on the chorus. The liberal New Republic actually suggested that livid activists cool down on this particular charge of racism.

Unfortunately, decades of experience in law didn’t stop a certain subsect of Sessions’ detractors. One of those who joined in the denunciation was Harvard Law professor Laurence Tribe.

This kerfuffle seems to be little more than cynical hectoring from blind partisans leading the gullible and uninformed to engage in a “Two Minutes Hate,” as George Orwell would put it, against a member of the Trump administration.

These reactions are becoming common in modern America.

College campus political culture, which preaches safe spaces, is skeptical or even hostile toward free speech, and brokers no dissent, is increasingly how many Americans now overreact to even hints of deviation from the perpetually-evolving notion of what’s politically correct.

Combine this culture with an increasing ignorance that our schools now fail to address and you have a toxic stew of perpetual outrage divorced from reasonable discourse. Instead of working to bring our nation together, the left’s bizarre interpretation of Sessions’ comment will just drive us further apart.