The $7.2 Trillion Difference Between Obama’s Budget and House GOP Budget 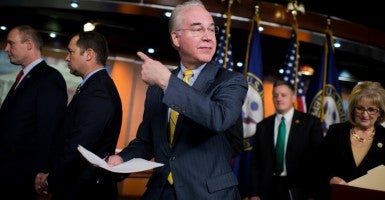 On Tuesday Tom Price, the new chairman of the House Budget Committee, released the GOP budget blueprint for the years ahead. It’s the anti-Obama budget. It repeals Obamacare. It eliminates scores of wasteful programs. It makes room for tax reform, a needed ingredient to growth. It block grants many of the welfare programs back to the states. It balances the budget by 2024.

Oh and it sticks to the budget caps and saves the sequester process which, as we pointed out on Monday, is critical to preserving fiscal discipline in Washington. Bravo.

Contrast that with the Obama budget. It raises the spending levels from $3.5 trillion last year (FY 2014) to more than $4.2 trillion in 2017. It busts through the caps with nearly $200 billion in new spending initiatives, such as his massive infrastructure bank. After 2018, it returns the deficit to half a trillion dollars or more for as far as the eye can see.

It allows Obamacare to grow and grow—adding millions more to the government health care dole. Instead of cutting taxes, he would raise taxes on investors, businesses, and estates.

So the contrast here is vivid. Price says the “goal of this budget is to accelerate economic growth through smart fiscal policy.” He points out that if he can get growth up from the anemic 2 percent Obama norm to 3.5 percent, which is the norm, he can raise at least $3 trillion more revenues over the next decade. These are the right ways to bring in tax receipts: by raising profits, incomes and employment.

Obama is clearly sporting for a fight with Republicans over budget priorities. He calls his budget middle class economics, which is a sorry joke since the middle class has lost income during the latest expansion. The last election showed voters on the side of Price’s priorities. Lower taxes and lower spending are the referendum voters received back in the November election that Obama would like to pretend never happened.

The case for spending control in the Price budget is made all the more compelling given the news that the Obama administration allowed some $125 billion in improper spending to people ineligible for program benefits, including illegal immigrants. Why feed more money to a beast that can’t even count?

Price’s budget will no doubt face stiff opposition from some Senate and House appropriators in his own party. Politico warns he may not have enough Republican votes to pass the budget out of the House. Rep. Mac Thornberry (R-Texas), Republican chairman of the House Armed Services Committee, says that under the GOP budget and the budget caps, “the country cannot meet its national security responsibilities.” But $523 billion is a gigantic sum that would be allocated to the Pentagon (plus an additional $94 billion in FY 2016 for Overseas Contingency Operations); and that $523 base number rises every year even with the caps.

The alternative to the Price budget is an Obama-lite fiscal spending plan, or worse.

Obama’s tax and spending policies have run up the debt by more than $7.5 trillion in six years in office. He would allow the giant entitlement programs to nearly double in size over the next decade. Almost no one outside this White House believes these are healthy or sustainable trends.

Price’s budget isn’t perfect; in fact, even under the GOP plan, spending rises from near $3.8 trillion to $5.1 trillion over the next decade—despite screams from the left that Price wants to decimate the safety net and throw senior citizens into homeless shelters. That’s tired nonsense, of course, and Price has merely produced a fiscal plan that walks the talk of Republican campaign rhetoric. It’s about time.