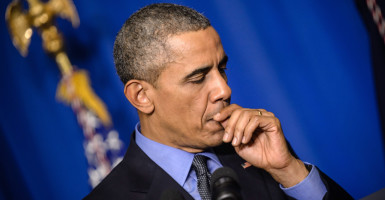 The past few weeks have been a remarkable time in environmental politics. Green groups have joined President Barack Obama in celebrating the global climate agreement reached in Paris, even though U.S. officials say none of the carbon reductions in the Dec. 12 deal are binding.

Remember, environmental groups have been campaigning for decades to drag the United States into legally binding carbon-reduction agreements that would be enforced by the United Nations.

But now, groups like Earthjustice and the Sierra Club are toasting non-binding numbers on a page as a historic victory. What gives?

Their real victory was winning applause from the United Nations for Obama’s go-it-alone carbon regulations without triggering an immediate political disaster back here at home. By calling the Paris deal non-binding, the president and his supporters evaded the U.S. Senate, which has the constitutional power to approve or reject treaties.

To justify this move, they argued that Senate Republicans could easily block the two-thirds vote usually required to approve a treaty. That may be true, but Republican opposition wasn’t the real danger for the White House and environmental groups. The disaster they avoided was the Senate debate itself, because the climate issue is deeply divisive and damaging for Democrats, no matter how much the environmentalist left tries to pretend otherwise.

Debating the Paris agreement on the Senate floor would be like having the “cap-and-trade” climate fight of 2009 and 2010 all over again. Back then, Democrats had huge majorities in the House and Senate along with the White House. For a time, they even had 60 votes in the Senate, enough to beat a Republican filibuster.

But even in early 2009, senior Obama officials were hedging. “It’s not going to be able to be done easily,” Lisa Jackson, the administrator of the U.S. Environmental Protection Agency at the time, said in a speech to the Georgetown Climate Center.

One major challenge is “people’s real fear about what this will cost them, how much it will cost them on their electric bill, or what it will cost them in jobs,” Jackson said. She also hinted strongly at actions the EPA could take without Congress, referencing the debate over “what’s legal [and] what’s illegal” and how those legal issues “have to be carefully thought out and carefully choreographed.”

Soon after, 26 Senate Democrats sided with Republicans in a vote that put the brakes on cap-and-trade. They effectively banned the use of budget reconciliation, which could have been used to pass cap-and-trade with 51 votes instead of 60. Later, a cap-and-trade bill passed the House, but only just. Forty-four Democrats joined Republicans in opposition. By comparison, only eight Republicans voted for the bill.

The Democrats who opposed cap-and-trade mostly came from industrial, agricultural, and energy-producing states. Some lawmakers from those states, like Colorado’s Betsy Markey, voted for cap-and-trade anyway. Environmental groups ran a series of “thank you” TV ads in their districts, but it didn’t help. Markey was one of 63 House Democrats who lost their seats in the 2010 midterm elections.

After the House vote, the cap-and-trade debate dragged on for a year, then collapsed completely in the Senate. “[W]e don’t have enough Democratic votes,” U.S. Sen. Dick Durbin, D-Ill., said at the time.

Resistance from Democrats was so strong that only 35 to 40 senators may have voted for cap-and-trade, and the bill never got a vote in that chamber. Even without a floor vote, the division cap-and-trade sowed in Democratic ranks and the economic anxiety it caused among voters contributed to the loss of six Senate seats for the party in the 2010 midterms.

One day after the election, Obama signaled he would use EPA regulations to get what he wanted, but without forcing his party’s painful divisions on climate change into the open again. “Cap-and-trade was just one way of skinning the cat,” Obama said. “I’m going to be looking for other means to address this problem.”

So, lesson learned. No high-profile Senate debate over the Paris climate agreement. True, the White House will have to fend off some House and Senate disapproval motions aimed at EPA regulations that support the Obama administration’s promises in Paris.

Dozens of states have filed legal challenges against those EPA regulations, too. Those moves are important, but they don’t draw the same attention as a full-blown Senate debate over an international climate agreement—especially when that agreement hinders the U.S. economy and merely hopes that other countries won’t take advantage.

Of the 26 Senate Democrats who voted with Republicans in 2009 to put the brakes on cap-and-trade, nine are still serving.

Avoiding a debate over the Paris climate agreement and its impact on energy prices, jobs and the economy is a great deal for them—especially U.S. Sens. Patty Murray, D-Wash., and Michael Bennet, D-Colo., who are running for re-election in November 2016. As things stand, they can just hunker down and let the EPA do its thing.

But it’s a lousy deal for the blue-collar and rural constituents who voted for these senators. Their concerns about the economy, energy prices, and jobs were front and center during the cap-and-trade debate, and they should be front and center again after the Paris climate agreement. Instead, these voters have been left in the cold while environmental groups toast themselves and whatever they think was achieved in Paris.

Originally published by The Complete Colorado.