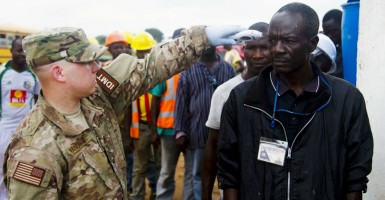 President Barack Obama highlighted several “success” stories in his State of the Union address: half-measures in Syria, kowtowing to Iran, and the U.S. response to the Ebola outbreak in West Africa.

Since others have described the administration’s failed efforts in Syria and Iran, I’ll focus on Ebola.

The president rightly acknowledged the essential roles played by the brave soldiers, doctors, and aid workers deployed to the outbreak, but before he adds West Africa to his Syria and Iran victory laps, lets first consider the facts.

The Heritage Foundation convened a task force last year to examine the administration’s response to the Ebola outbreak.

1) The president deployed 3,000 American troops to West Africa in Sept. 2014. This is consistent with longstanding doctrine for the U.S. military to backstop a civilian government during a major disaster.

Consider a domestic disaster like Hurricanes Katrina or Sandy, where the military stepped up in the face of an overwhelmed FEMA. Similarly, the State Department (USAID) realized that it lacked the capabilities to stop the spread of Ebola, there so the military was called upon to provide critical assistance.

Meanwhile, at the White House, the president appointed a lawyer to serve as “Ebola czar.” This ad hoc move served only to confuse lines of authority among federal agencies. The lesson here should be obvious: There is no substitute for “boots on the ground” during a crisis.

2) The president ignored the bungled the domestic response to the Ebola outbreak in his speech. From a failure to properly identify infected patients to a serious accident at the Centers for Disease Control (CDC)’s main research laboratories, the domestic response highlighted shortcomings in the U.S. government’s ability to manage a public health crisis.

To ensure that the nation is better prepared to respond to future public health emergencies—whether they be a naturally occurring infectious diseases or bioterrorism—the president must address the gaps in our domestic response capabilities.

3) The president might have forgotten about his administration’s inept response to the Ebola outbreak, because he never commissioned an official review of the crisis. The purpose of an after-action review is to institutionalize the lessons from a disaster so that mistakes are not repeated in the future.

As I described in my post “What the Obama Administration Still Hasn’t Learned From the Ebola Crisis” last year, the administration has yet to consider—much less embrace—the lessons from the crisis. While the president chose symbolic and ineffectual steps like appointing an Ebola czar in the White House during last year’s crisis, it was the boots on the ground that ultimately yielded results.

Hopefully our next president will realize that results are more important than simply rhetoric when he delivers his first State of the Union address.