Is the Obama Administration Misleading Americans About How Close Iran Is to Getting a Nuclear Weapon? 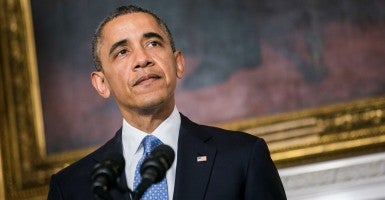 First, let’s look at some history about the Obama administration and Iran. In 2010, Congress passed the Comprehensive Iran Sanctions, Accountability, and Divestment Act. This law imposes one of the most comprehensive sanctions regime on Iran to date.

The effect of the law and the resultant Iranian economic losses allowed the administration an opportunity to negotiate about Iran’s illegal nuclear program.

The administration fought the 2010 bill tooth and nail, which is particularly puzzling considering it likely knew about Iran’s nuclear breakout capability now estimated at three months.

A breakout capability is a measure of the time between a decision to produce enough weapons grade material to arm one nuclear weapon and producing said material. The Obama administration’s Joint Comprehensive Plan of Action states that a nuclear deal with Iran would delay this time from two to three months to a year.

In reality, it is highly unlikely that the emerging deal would yield all of the benefits the administration attributes to it. Iran has already accused the White House of misleading the American public and Congress.

In October 2013, the administration estimated that Iran’s breakout capability to be over a year. This estimate helped it play down a sense of urgency, enhanced its argument that there was time for diplomacy and helped it fend off stronger congressional sanctions, which it repeatedly opposed.

It quietly changed the estimate with no explanation after negotiations with Iran started in 2014.

On April 1, the Obama administration suddenly declassified the estimate that Iran could accumulate enough weapons grade fissile material to build one bomb in two to three months.

The previous one-year estimate apparently also included an estimate of how long it would take Iran to build a warhead out of the enriched uranium, which the administration took pains to obfuscate.

It is not clear why this information was eligible to be abruptly declassified. But the more alarming estimate comes at a convenient time for the administration. It now can argue that there is a greater urgency to cement the tentative framework deal announced on April 2, the day after the estimate was declassified.

The deal outlined in the Joint Comprehensive Plan of Action will not halt Iran’s nuclear weapons efforts, but only slow the pace of its advance temporarily and provide legitimization of Iran’s illicit nuclear efforts.

Despite six U.N. Security Council Resolutions that called for a halt in its enrichment efforts and abundance of cheap enriched uranium on the global market, the administration has essentially accepted Iran’s self-proclaimed “right” to enrich uranium and has abandoned demands that Iran dismantle its nuclear infrastructure, which Iran built in defiance of its Nuclear Nonproliferation Treaty commitments.

Before any sanctions are lifted, Iran has to become transparent to the International Atomic Energy Agency and the P5+1 (China, France, Russia, United Kingdom, United States and Germany) as to how it managed to get to a three-month breakout capability in the first place.

An acceptable nuclear deal would at least result in a permanent halt in Iran’s uranium enrichment and plutonium production.

But this administration will never attain such an acceptable deal, because it weakened its own bargaining leverage by repeatedly opposing stronger congressional sanctions, in part by manipulating politicized intelligence.