Conservatives, GOP Committee Chairs Back Away From Bill Allowing States That Like Obamacare to Keep Obamacare 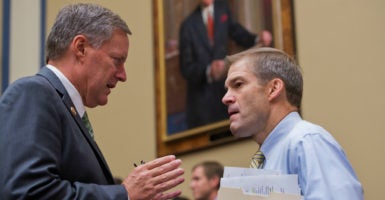 PHILADELPHIA–Republican leaders in Congress appear to be backing away from a plan supported by four GOP senators that would’ve kept Obamacare in place for states that like the law.

According to a senior Republican aide, GOP committee chairmen, as well as conservative lawmakers, are moving against the bill introduced earlier this week by Republican Sens. Bill Cassidy of Louisiana and Susan Collins of Maine.

Congressional leaders and Republican lawmakers discussed the legislation Thursday during a session on health care at the GOP’s joint retreat in Philadelphia.

The bill, called the Patient Freedom Act, would allow states that “like Obamacare to keep Obamacare,” while also giving states that are unhappy with the law the freedom to implement a new health care system.

But the plan, which Cassidy hoped would attract Democratic support, hasn’t earned the backing of some of his colleagues in Congress.

“’If you like Obamacare, you can keep Obamacare’ is not a ringing sort of rallying cry that Republicans across the country are going to rally to,” he said. “I would say the vast majority of Republicans who voted in the election thought they were voting for people to repeal Obamacare, not keep it.” Like Paul, Rep. Jim Jordan, R-Ohio, also pushed back on the Cassidy-Collins bill.

Jordan previously chaired the House Freedom Caucus, a group of approximately 40 conservatives, and warned that keeping the Affordable Care Act in place, regardless if it’s for just a few states, would break Republicans’ campaign promises to voters.

“We already know people don’t like Obamacare,” he told The Daily Signal. “This just doesn’t make sense to me. It’s the wrong way to go.”

Republican Rep. Mark Meadows of North Carolina, who currently chairs the House Freedom Caucus, said that while he doesn’t support the Cassidy-Collins bill, he appreciated their willingness to talk “about specifics.”

“It really is an Obamacare-type plan, and doesn’t really repeal it,” Meadows told reporters. “That being said, I made a personal commitment to go to them and thank them for talking about specifics. It’s time we start talking about specifics, negotiating back and forth, on what works and what doesn’t work for our constituency.”

Republicans gathered in Philadelphia for a three-day retreat to map out their strategy for the Trump presidency.

>>>A Look at 4 of the GOP’s Obamacare Replacement Plans

GOP leaders said their plan is to include parts of a replacement in the reconciliation bill, Rep. Chris Collins, R-N.Y., told reporters. Leaders also are in favor of including a repeal of Obamacare’s taxes in the bill, a senior Republican aide told The Daily Signal.

The latter issue split Republicans in the House and Senate, who disagreed over the timing of the taxes repeal.

Meadows told reporters that they had not yet come to a consensus on whether a repeal of the taxes should be included in the reconciliation bill.

Conservative lawmakers called for their colleagues to dismantle as much of Obamacare as possible, following through on the promises made to voters on the campaign trail.

“The onerous taxes, regulations—it’s those regulations that are driving up premiums and deductibles,” Jordan said. “We have to get rid of them.”

But some senators pushed to delay a repeal of the taxes for several months and address them in a future bill to reform the tax code. Waiting to roll back the taxes, those senators said, would keep in place revenue streams needed to fund a replacement.

With control over both chambers of Congress and the White House, the GOP now has the chance to repeal the health care law, action they’ve been talking about taking for the last six years.

Congress took the first step in the repeal process earlier this month, but Ryan told Republicans on Wednesday that repeal and replace likely wouldn’t happen until March or April.

“If you start with the premise that I do and most Americans do, which is that health care will be better and cost less once Obamacare is gone, then obviously it makes sense for it to be repealed as quickly as possible,” he said. “That’s the premise I start from. What that works out to be, I’m not sure yet.”