Obama Visits Argentina as It Works to Improve Economic Freedom 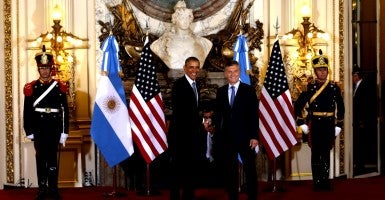 President Barack Obama has arrived for a state visit to Argentina. His trip to meet with President Mauricio Macri comes as Argentina is trying to grow its economic freedom.

There is the grim situation facing Macri and his team. Argentina ranked 169th of 178 countries in the Heritage Foundation’s “2016 Index of Economic Freedom,” one of the worst performances in the world and near the bottom of the 29 countries in Latin America.

Under previous governments, Argentina received very low scores on all 10 of the country’s economic freedom indicators.

The country’s investment profile was badly damaged by monetary and fiscal mismanagement, protectionism, interventionism in the private sector, and expropriations. Along with declining economic freedom, relations between Argentina and the United States also soured under former President Cristina Fernández de Kirchner. All of these problems are examined in depth in a new Heritage Special Report on Argentina that was just released.

There’s good news for Argentina. The time period covered by the “2016 Index of Economic Freedom” ended on June 30, 2015, six months before the Macri government took over.

This means that many of the bold and positive steps that Ambassador Lousteau reported his government has already taken (or soon will) to restore economic freedom will be reflected in future editions of the index.

They include a series of reforms to ensure that Argentina’s currency, the peso, is priced at market value as well as cuts in export taxes and energy subsidies. Argentina is also making progress to settle with its hold-out creditors.

Best of all for Americans are the actions Argentina is taking to improve relations with the United States, its biggest source of foreign investment and an important trading partner. The visits by Obama to Buenos Aires and an upcoming visit by Macri to Washington reflect those goodwill efforts.