Obama Is Dodging Tough Questions About Exchange for Bergdahl Release 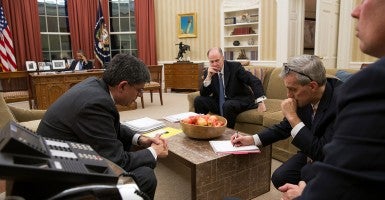 He was MIA. His family could only pray they would ever see him again.

Despite the Pentagon’s ongoing efforts to account for all warriors taken prisoner or missing in action, Gordon fell through the cracks.

The story could have ended there. Except that a team of volunteer researchers learned of Gordon’s disappearance and resolved to find him and bring him home.

And find him, they did. Killed in combat, Gordon had been mistakenly buried in a German military graveyard.

With the cooperation of German and French officials, the team obtained a DNA test that proved Gordon’s identity.

This month, relatives will fly the remains to Madison, Wis., where they will be reexamined, then returned to the town of Eastend, Saskatchewan. There, Private Gordon will be laid to rest with his family.

Yes, Gordon was Canadian. He joined the U.S. Army because he believed it offered the best opportunity to get overseas and stick it to the Nazis.

The volunteers’ perseverance in bringing this soldier home is a noble expression of the sentiment that “no soldier gets left behind.”

Gordon’s story has meaning for Americans trying to untangle the mystery and controversies surrounding the “prisoner exchange” that led to the release of Army Sgt. Bowe Bergdahl in Afghanistan.

When questions arose about the facts and conditions of the exchange, which released five high-level Taliban leaders detained at Guantanamo Bay in return for Bergdahl, the president tried to brush aside the doubters with a noble-sounding assertion: “We don’t turn back. We leave no one behind.”

Yes, the American military has a proud tradition of striving to account for every U.S. soldier in every conflict — and working relentlessly to secure the release of every member of the armed forces taken prisoner. It is a commitment that we owe everyone in uniform who puts himself or herself in harm’s way to serve the nation.

But stating that principle in no way eases the concerns or answers the questions raised by this particular deal. The president was simply tossing out high-sounding rhetoric that fails to respond to real-world circumstances.

That’s exactly what he did in his foreign policy speech last week at West Point. For example, Obama attempted to defend his lead-from-behind approach by declaring, a “strategy that involves invading every country that harbors terrorist networks is naive and unsustainable.” Of course it is. No serious voice in U.S. national security has ever advocated that course of action, much less pursued it. Obama was merely knocking down a straw man of his own devising.

How disappointing to see the president exactly the same rhetorical device to deal with the complicated facts and decisions surrounding the return of Bergdahl.

Of course, every American agrees that the U.S. has an unshakable obligation to bring every son and daughter home. No one disputes that. But how it accomplishes that duty matters, as well.

The process should not compromise American national security. Nor should honor be compromised. Ever.

These are the issues that Americans wanted the president to address, so that they could understand his deal with the Taliban.

By opting for rhetoric instead of speaking responsibly, Obama has widened an already growing gap in how much Americans trust him to conduct foreign policy prudently and responsibly.