Most of Obama’s Green Policies Persist at Department of Defense 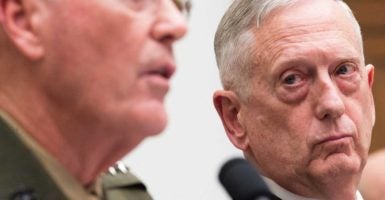 As Congress considers green projects in a military spending bill, the Trump administration hasn’t staked out a strong case on whether to roll back the Obama administration’s aggressive push for biofuels, wind, solar, and other renewables in the military.

“The Pentagon has bought into climate change because it makes it politically more acceptable,” @myronebell says.

“The Navy, from my briefings to date, is totally aware of rising water issues, storm issues, etc.,” Spencer said. “We must protect our infrastructure, and I will work hard to make sure we are keeping an eye on that because without the infrastructure, we lose readiness.”

This week, the House debated the National Defense Authorization Act for fiscal year 2018. Last month, the Republican-controlled House Armed Services Committee passed an amendment by Rep. Jim Langevin, D-R.I., directing the Defense Department to assess 10 bases in each branch most threatened by climate change, and for the Pentagon to count climate change as a security risk to deal with—even as several government audits in the last two years have found the alternative energy sources haven’t been efficient for the DOD.

A 2015 study by the Union of Concerned Scientists, an environmental advocacy and research group, warned that 128 U.S. military bases could be submerged because of rising sea levels.

Reps. Scott Perry, R-Pa., and Warren Davidson, R-Ohio, each sponsored their own amendments to strike the Langevin provision. Perry’s proposal would remove the language to save money for the Pentagon, while Davidson’s amendment would strike down a 2015 executive order by President Barack Obama that requires the military to meet emission reduction targets.

However, neither of the Republicans’ amendments will likely make it to the floor despite clearing the rules committee, said Myron Ebell, director for the Center for Energy and the Environment at the Competitive Enterprise Institute.

“There are problems at the Pentagon and in Congress,” Ebell, who served on President Donald Trump’s transition team, told The Daily Signal. “President Trump signed an executive order that got rid of some green energy programs at the Pentagon, but others are left in place.”

Trump signed an order rescinding Obama’s Executive Order 13653 directing the Department of Defense and other departments to use resources to prepare for the impact of climate change. However, Trump hasn’t rescinded this executive order, which the amendment Davidson is offering would undo, Ebell noted.

“The Pentagon has bought into climate change because it makes it politically more acceptable to people who wouldn’t normally like the Pentagon,” Ebell said. “Another reason is that it’s another means to enhance the portfolio and receive more funding, even if it’s not part of the essential mission.”

One of the nation’s leading environmental groups expressed frustration over the two House Republicans’ proposals.

“Apparently there is no limit to what some Republican members of Congress like Reps. Scott [Perry] and Davidson are prepared to do to wipe away reality, consequences be damned,” Liz Perera, a policy director for the Sierra Club, said in a statement. “Some House Republicans think they know more about climate science than actual scientists, and, amazingly, more about how to protect our troops and military bases than the Pentagon. This kind of blind arrogance endangers the health of our families and the security of our nation.”

Navy Cmdr. Patrick L. Evans, a Pentagon spokesman, referenced some of the existing policies and told The Daily Signal, “not to my knowledge,” when asked if there would be significant changes under the Trump administration regarding renewable energy rules across military branches.

Title 10 of U.S. Code Section 2911 states that 25 percent of Department of Defense facility energy use be generated by renewable energy sources by 2025 and it would take an act of Congress to reverse this.

However, most policies are administrative, said Rachel Zissimos, a research associate for national security and defense studies at The Heritage Foundation.

This includes Obama’s 2011 directive that the Navy and other departments and agencies “work with private industry to create advanced drop-in biofuels that [would] power both the Department of Defense and private sector transportation throughout America.”

In 2015, the Department of Defense issued a report on the unrest climate change could cause. In a statement about the report, the department said:

The Department of Defense’s primary responsibility is to protect national security interests around the world. This involves considering all aspects of the global security environment and planning appropriately for potential contingencies and the possibility of unexpected developments both in the near and the longer terms. … It is in this context that the department must consider the effects of climate change—such as sea level rise, shifting climate zones, and more frequent and intense severe weather events—and how these effects could impact national security.

In September 2016, the Government Accountability Office found that of 17 renewable energy programs in the Department of Defense, only two provided power in case of a grid outage. The other programs were costly, and the department’s spending on renewable energy went up by 60 percent from 2014 to 2015, according to the audit.

A separate Government Accountability Office study in July 2015 found the department still spends far more on traditional gasoline for fuels, but gets a better bargain per gallon than with alternatives.

The Pentagon paid $58.6 million for 2 million gallons of alternative fuel from 2007 to 2014—which would be about $29 per gallon for alternatives. Conversely, over that same time, the department spent $107.2 billion for 32 billion of petroleum, which would only be $3 per gallon.

A Department of Defense comptroller general’s report in February 2016 found that the cost of environmental compliance increased by more than $119 million from the previous fiscal year.

During his Senate confirmation, Defense Secretary James Mattis said in written testimony to the Senate Armed Services Committee that “climate change is impacting stability in areas of the world where our troops are operating today. It is appropriate for the Combatant Commands to incorporate drivers of instability that impact the security environment in their areas into their planning.”

When serving as the commanding general of the 1st Marine Division during the second Iraq War, Mattis said the Department of Defense should “unleash us from the tether of fuel.”

Mattis wasn’t advocating addressing alternative fuels because of climate change, but rather because of the cost of transporting fuel, Zissimos said.

“The biggest cost for fuel is transportation, delivery, and storage,” Zissimos told The Daily Signal. “Operations are primarily overseas. A huge investment in biofuels will not reduce that cost because they will still need to be transported overseas.”