The Sad Case of Alfie Evans: A Sordid Lesson in Government-Controlled Health Care 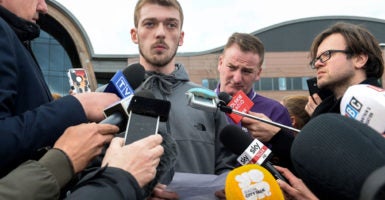 The next time Sen. Bernie Sanders or his progressive Senate allies tout their proposal for total federal control of health care, just remember the case of Alfie Evans.

Hospital physicians have determined that Alfie is in a “semivegetative state.” Remarkably, however, hospital personnel have been unable to give Tom Evans and Kate James, Alfie’s parents, a diagnosis of exactly what’s wrong with their child.

The parents wanted to move little Alfie to other hospitals, in hopes that he would have a chance of getting better care. British officials denied the parents’ requests.

British authorities determined that Alfie must remain in the hospital, and hospital officials determined to end medical treatment, remove the ventilator, and let the child die. In the meantime, Alfie’s parents went to the British courts for relief, as well as the European Court of Human Rights. These panels denied the parents’ petitions.

Alfie’s parents wanted to fly their son to Rome, Italy, where they could get a second medical opinion and try alternative treatments from Italian doctors that Alder Hey Children’s Hospital either would not or could not provide. A British court blocked that parental option, declaring that such a trip to the Rome would be “wrong and pointless.”

Finally, on appeal, the Supreme Court of the United Kingdom on April 20 issued its four-page decision, concluding: “The hospital must be free to do what has been determined to be in Alfie’s best interests. That is the law in this country.”

With the court’s ruling, hospital officials withdrew life support April 23, and expected the child to die quickly. After all, the British courts had formally and decisively ruled that the child’s condition was hopeless, and that he could not live without a ventilator.

That same day, Italy intervened. The Italian government granted Italian citizenship to Alfie, and agreed to fly the child to Rome for treatment at Bambino Gesù Pediatric Hospital. There would be no cost to the National Health Service or the British taxpayer. As of this writing, British authorities have refused these charitable overtures.

In correspondence with this writer, Joseph Morris, a former assistant attorney general of the United States and a law partner in a firm with offices in Britain and America, says the U.K. Supreme Court’s decision is itself beyond stunning:

The court holds that the preferences of the bureaucracy count for more than the judgments of Alfie’s parents. The court does not explain why this must be. The court’s opinion leads ineluctably to the conclusion that the views of the bureaucracy count for more than the views of a family in determining what is in the best interests of a child. … This is a dark hour for British justice. Parliament and the British judiciary stand indicted by their own actions and inactions of cruelty, intellectual dishonesty, and the high crime of hostility to life and liberty.

Morris is correct. British hospital officials may indeed be right in assessing Alfie’s condition as terminal, but British government officials are wrong in denying Alfie’s parents the right to try alternative medical treatment.

The sordid Alfie Evans saga holds larger lessons for all of us.  If you give government officials control over your health care, you give them control over your life. If you reduce medical judgments to political or bureaucratic decisions, you can expect arrogant and cruel, often heartless and incompetent, decisions.

Finally, if you assume that the laws of the state are superior to the laws of God, then, for all practical purposes, your God is the state. If there is no higher law over the power of the state—natural law, as Cicero and Aquinas, Locke and Jefferson would describe it—then, logically, state power is absolute. Welcome to tyranny.

And yes, it can happen here.