Why Americans Should Celebrate the Brexit Vote 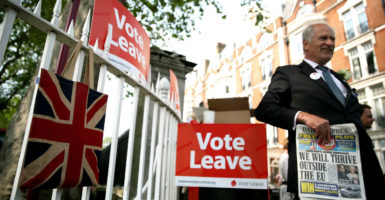 The momentous victory for the Brexit campaign signals a new era of freedom for the British people.

Britain outside the EU will be a stronger ally for the United States.

After more than four decades of being shackled to the European Union (previously the European Economic Community), Great Britain has declared its independence.

The vote for Brexit (52 percent of Britons cast ballots to leave the EU) is a vote for sovereignty and self-determination. Britain will no longer be subject to European legislation, with Britain’s Parliament retaking control. British judges will no longer be overruled by the European Court of Justice, and British businesses will be liberated from mountains of EU regulations, which have undermined economic liberty.

Indeed, Brexit will result in a bonfire of red tape, freeing the city of London and enterprises across the nation from European Union diktat. And at last, Britain is free again to negotiate its own free trade deals, a huge boost to the world’s fifth largest economy.

The United States should seize upon Brexit as a tremendous opportunity to sign an historic free trade agreement with the United Kingdom—a deal that would advance prosperity on both sides of the Atlantic. Brexit will also strengthen the Anglo-American special relationship, the most important bilateral partnership in the world.

Britain outside the EU will be a stronger ally for the United States, from confronting Russian aggression in Eastern Europe to defeating the Islamist terror threat.

Britain’s decision to leave the EU should be a cause for celebration here in America. Brexit embodies the very principles and ideals the American people hold dear to their hearts: self-determination, limited government, democratic accountability, and economic liberty. A truly free and powerful Great Britain is good for Europe and the United States.

As Margaret Thatcher famously declared after the liberation of the Falkland Islands by British forces in 1982: “Rejoice.” The Iron Lady believed firmly that Britain would be better off outside the European Union.

The British people can rejoice in their rediscovered freedom. It is a cause for celebration for America, too.