Europe Comes Up With Perfectly Orwellian Responses to ‘Fake News’ 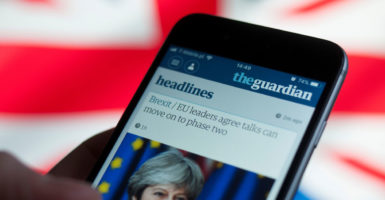 In their zeal to stamp out “fake news,” European governments are turning toward Orwellian solutions that are worse than the disease.

The European Commission recently created a 39-member panel to explore avenues to eliminate fake news. On Twitter, it announced that it seeks to find a “balanced approach” to protecting free speech and making sure citizens get “reliable information.”

We need to find a balanced approach between the freedom of expression, media pluralism and a citizens' right to access diverse and reliable information.

The High-Level Expert Group is one part of our activities to address the spread of #fakenews: https://t.co/Qk4xkFvR8J pic.twitter.com/0w1YEMW8Wm

This follows in the footsteps of individual governments in Europe that have decided that the way to defeat fake news is to have the government decide what the truth is.

Germany recently enacted a law that allows the government to censor social media and fine related companies that won’t take down what government officials deem fake news or hate speech.

And on Tuesday, U.K. Prime Minister Theresa May announced the creation of a commission to respond to fake news called the National Security Communications Unit.

A spokesperson for the May government said: “Digital communications is constantly evolving and we are looking at ways to meet the challenging media landscape by harnessing the power of new technology for good.”

The key problem with these proposals is obvious, as the Washington Examiner highlighted in an editorial.

“One must ask who will decide which news is real and respectable, on the one hand, and which, on the other, is fake and must be censored?” the Examiner asked, before referring to George Orwell’s dystopian novel “1984”:

Will it be bureaucrats in a censor’s office in a bigger agency? Or, will their work be so extensive and important that they will need a new agency of their own? Will they go the full Orwell and name it the Ministry of Truth?

Whoever should be able to create and maintain a tribunal of this kind would waste his time in prosecuting the liberty of the press; for he would be the absolute master of the whole community and would be as free to rid himself of the authors as of their writings.

Censorship of this sort is what the Founding Fathers feared. They knew that despite the problems occasionally caused by the proliferation of fake news and false ideas, it was far more dangerous to make the government the arbiter of what is true and false rather than citizens.

Therefore, the Founders created the First Amendment and instilled a culture that respected the individual right to free speech. This was the best and perhaps only way, in the fallible world of men, ultimately to get to the truth.

There is ample evidence that the proliferation of fake news has far less consequential impact than doomsayers would admit.

A recent study concluded that while fake news often spreads far with the help of tools such as social media, it has a shallow impact on what Americans believe. This begs the question of why near-authoritarian measures would be implemented that so badly undermine free speech rights.

For all the worry over foreign, authoritarian regimes manipulating our elections with propaganda, by implementing government-run commissions on fake news we will simply be turning to repressive means to solve this perceived problem.

The proposed commissions to weigh free speech rights against delivering the “correct” news would likely have shallow utility even if they somehow could provide “accurate” stories to citizens. However, giving such panels the power to do so would be Tocqueville’s worst nightmare: a license to impose government’s views on the people and squash potentially legitimate dissent.

This is why it’s particularly absurd that the Committee to Protect Journalists, a group dedicated to promoting free speech for journalists, labeled President Donald Trump as the world’s greatest threat to press freedom.

The Federalist’s David Harsanyi wrote: “Trump’s attacks on journalists—some of it brought on by their own shoddy and partisan behavior—are often unseemly and unhealthy, but it hasn’t stopped anyone from engaging, investigating, writing, saying, protesting or sharing their deep thoughts with the entire group.”

Though Trump has proposed strengthening libel laws, a more traditional way of curbing intentional media falsehoods, his administration has made no widespread legal attack on the ability of Americans to disseminate news and views.

Saying mean things on Twitter isn’t an attack on free speech, but censorship by an unaccountable government board certainly is.

For all the hyperbole and hysteria following the coverage of the president, it has ultimately been our celebrated friends across the pond who’ve decided to take an ax to free speech, cloaked in the soothing rhetoric of protecting democracy.

At times like this we can be thankful for the Founders and the First Amendment, but this shouldn’t lull us into thinking that these terrible ideas won’t make their way here too.