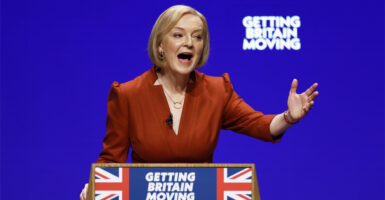 Her plan is "about getting the economy growing and rebuilding Britain through reform,” British Prime Minister Liz Truss says Oct. 5 during the final day of the Conservative Party Conference in Birmingham, England. (Photo: Jeff J. Mitchell/Getty Images)

In her speech last week at the Conservative Party Conference in Birmingham, British Prime Minister Liz Truss made it crystal clear that her economic plan is “about getting the economy growing and rebuilding Britain through reform.”

Truss emphasized that in these challenging times, the United Kingdom needs to “step up” and “do things differently.”

Indeed, Truss’ pro-growth economic agenda may be a work in progress but it’s worth a shot as the new prime minister offers a clear alternative to the certainty of steeper economic decline.

Markets “supposedly” flared up after Truss and her chancellor of the exchequer, Kwasi Kwarteng, unveiled a reduction of the top marginal personal income tax rate from 45% to 40%. That proposal was the only ill-timed, loud hiccup in the context of a broader package of tax reductions as well as other reform measures.

Calling time on policy missteps made in recent years, Truss and Kwarteng have been quite upfront about their preferred path forward to restoring Britain’s economic dynamism by pursuing tax reductions, fiscal reforms, and deregulation, among other things, to spur much-needed investment and productivity growth in the private sector.

Unfortunately, the initial reaction to this not-so-radical, free market-based economic blueprint for the U.K.’s new conservative government had been rough and quite one-sided. Many have rushed to hasty political verdicts targeted at Truss’ just begun premiership. Perhaps one fitting description of the whole regrettable debacle would be politically driven overreaction.

Pointing out that the underlying cause of Britain’s current mess stems from Truss’ conservative predecessors’ big government policies and too easy monetary policy, a recent Wall Street Journal editorial observed:

Everyone needs a scapegoat in an economic crisis, and much of the world has settled on blaming British Prime Minister Liz Truss’s economic plans. The International Monetary Fund and the Biden Administration have piled on, which conveniently deflects from their failed policies that produced inflation and slow growth. Expect criticism as well from America’s big-government conservatives worried Ms. Truss’s program might succeed.

Britain’s big government approach has been without cost. According to the latest edition of The Heritage Foundation’s annual Index of Economic Freedom, a cross-country study that compares economic policy environments in terms of fiscal health and regulatory efficiency, among other aspects, the United Kingdom’s ranking for economic freedom in the world has dropped out of the top 20 and tumbled to No. 24.

With lower marks for fiscal health, business freedom, and labor freedom, the U.K. has recorded a sizable overall loss of economic freedom since 2017 and has fallen to the lower half of the “Mostly Free” category. Excessive government spending has been a drag on fiscal health.

What Truss and her economic team have been trying to do, quite decisively, is to restore Britain’s economic freedom and vitality by “rightly challenging the declinist consensus,” as David Frost wrote in The Telegraph, and reversing the botched course of policy action.

The resolute stance on pursuing economic reforms also reflects her call for an aspiration-based society, one that champions individual freedom over government handouts and dependency, propelled by the free market principles that advance economic freedom and opportunities.

It also is notable that Truss’ conservative government plans to install supply side, free market energy reforms that encompass more oil leases, removal of restrictions on fracking, and expansion of nuclear power.

Truss was absolutely right when she unambiguously pinpointed in her speech to the Conservative Party Conference:

Economic growth makes us strong at home and strong abroad. We need an economically sound and secure United Kingdom. And that will mean challenging those who try to stop growth.

From a foreign policy perspective, what Truss articulated as British foreign secretary in an April 27 speech titled “The Return of Geopolitics” also is quite resounding in the context of her broader economic freedom agenda as prime minister. As she underscored:

[F]ree markets are the most powerful engine of human progress. We will always champion economic freedom. … For too long, many have been naive about the geopolitical power of economics. Aggressors treat it as a tool of foreign policy, using patronage, investment, and debt as a means to exert control and coerce. They are ruthless in their approach. Our response won’t mirror their malign tactics, but we will match them in our resolve.

Indeed, history shows us that freedom and prosperity go hand-in-hand as the human spirit thrives on virtuous liberty. The proven path to preserving and enhancing opportunity, prosperity, and individual well-being is the path of freedom.

Quite unacceptably, here at home, America’s economic freedom is in growing peril as President Joe Biden’s spendy, bloated government continues to corrode our economic freedom through the cost, size, and intrusiveness of government.

Making a strong case for why America needs policies that nurture freedom and prosperity, Heritage Foundation President Kevin Roberts and Sen. Mike Lee, R-Utah, penned a joint op-ed earlier this year in which they underlined:

Economic freedom still works … [T]here remain strong correlations between countries’ economic freedom scores and their quality of life. … The human spirit, expressed in individual initiative, remains every bit as much the wellspring of community. … [E]conomic freedom is not something Americans should apologize for, but harness, spur and give free rein—for our own sake, and everyone else’s, too.

More than ever, now is the time to act on that reminder to restore America’s economic freedom, as well as Britain’s.

To that end, Truss’ agenda for free market economic reform deserves a chance.