Why Economic Freedom Is More Integral to Foreign Policy Than Ever 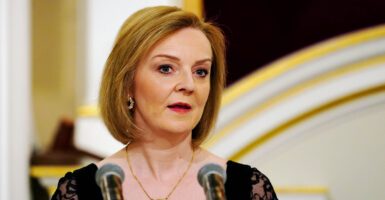 In an April 27 speech, “The Return of Geopolitics,” British Foreign Secretary Liz Truss made a compelling case for a reboot in the free world’s approach to tackling global aggressors, particularly in the context of Russia’s invasion of Ukraine.

Truss pointed out that we “must be prepared for the long haul.”

My vision is a world where free nations are assertive and in the ascendant; where freedom and democracy are strengthened through a network of economic and security partnerships; where aggressors are contained and forced to take a better path.

Indeed, the vision that Truss laid out so succinctly is the fundamental foundation of the special relationship between the United States and the United Kingdom, which must be enhanced through greater cooperation on security and economic fronts more than ever.

Free trade and free markets are the most powerful engine of human progress. We will always champion economic freedom. …. For too long, many have been naive about the geopolitical power of economics.

Aggressors treat it as a tool of foreign policy, using patronage, investment, and debt as a means to exert control and coerce. They are ruthless in their approach.

Our response won’t mirror their malign tactics, but we will match them in our resolve.

It’s time to wise up. … Our new approach is based on three areas: military strength, economic security, and deeper global alliances.

With respect to “wising up” strategically and effectively, economic engagement is a key pillar of supporting and spreading economic freedom. The free world can best prevail by advancing rules-based economic cooperation and competition.

Economic freedom helps nations generate the wealth that enables them to defend themselves. Beyond that, it creates a community of nations with a shared interest; namely, protecting their right to freely exchange goods, services, and ideas.

This common bond promotes the cause of peace by creating strong, self-reliant, sovereign, and independent nations interested in preserving the mutual freedoms that allow them to engage commercially and prosper.

Much of that economic interaction will come not through traditional government foreign assistance, but more effectively from private-sector investment that promotes growth and respects the need for good governance.

Building the rule of law in the economic and trade sphere is, therefore, a critical component of building enhanced economic engagement.

From a broader foreign policy perspective, America’s and Britain’s like-minded and willing partners in liberty ought to have enduring confidence in human rights, representative governments, and free enterprise.

Vladimir Putin’s Russia, the Chinese Communist Party, and other aggressors do not believe in any of those things. If the U.S. and its free world partners do not band together to protect those equities, our world will always be at risk and subject to the erosion of the very system we have been fighting for.

In preserving and enhancing the free world, a sound, effective foreign policy requires both strength and focus. Policy leaders around the world should link a call to restore a strong national defense and promote economic freedom abroad with a plan to make their domestic economies freer, more resilient, and healthier.

History shows us that security, freedom, and prosperity go hand in hand as the human spirit thrives on virtuous liberty.

Calling for the need to create an “economic NATO,” Truss concluded her speech by underscoring that together, “we have tremendous strength.”

“Let’s use it to forge a better, more secure world, and a stronger global economy,” she said.

Now is the time for Washington and London, the two main drivers of transatlantic stability and peace, to act on that resolve.