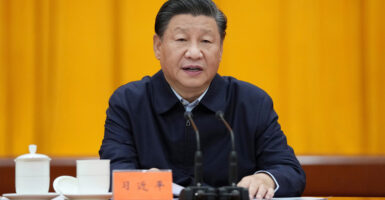 Chinese President Xi Jinping, seen here Sept. 27 in Beijing, has embraced the Chinese Communist Party’s new paradox between craving greater control that puts the party above all and the pursuit of much-needed positive economic outcomes, despite that being an increasingly challenging proposition. (Photo: Li Xueren/Xinhua/Getty Images)

In an attempt to lay out the Biden administration’s approach to charting the course of the U.S.-China economic relationship, U.S. Trade Representative Katherine Tai underscored that the bilateral relationship is “complex and competitive.”

More importantly, Tai noted, “In recent years, Beijing has doubled down on its state-centered economic system. It is increasingly clear that China’s plans do not include meaningful reforms to address the concerns that have been shared by the United States and many other countries.”

Indeed, that’s the core of the problem in moving forward the “complex and competitive” U.S.-China economic relationship.

Entry into the World Trade Organization in 2001 further opened China’s market to foreign trade and investment, enabling China to lift millions more out of abject poverty and giving a greater number of Chinese citizens access to a better quality of life and leisure.

About 15 years ago, the one-party government in Beijing began redefining state-owned enterprise “reform,” using the phrase to refer to centralizing state control over key industries, the opposite of what it means in the rest of the world.

The Chinese Communist Party’s third plenum in 2013 outlined how the state would reduce control of commercial state-owned enterprises, while pushing them in key industries that contribute the most to China’s economic development and national security to focus on “core” areas of their businesses.

In practice, that has meant ever-increasing deference by state-owned enterprises to party officials’ top-down control of their activities.

Pursuing and maintaining high rates of economic growth is not, of course, the primary goal of any communist dictatorship. The real objective is always the party’s retention of full control of the country’s people, usually by any means necessary. The party does seem to understand that spurring continued economic growth is a key factor in maintaining popular support.

That makes its continued affinity for relying on its “state-centered economic system” particularly misguided and eventually unsustainable. It’s bad for China in the end, but it certainly causes distortions in markets beyond China’s borders as well.

China has not fared well in The Heritage Foundation’s annual Index of Economic Freedom, which measures economic governance in key areas related to economic growth and prosperity.

China’s economic freedom has grown over the past few decades, but at a snail’s pace. The Chinese economy remains “mostly unfree” and stands as the 107th-freest (out of 179) in the 2021 index, lagging behind the majority of other countries in maximizing opportunities for greater economic dynamism.

We don’t yet know where the new policy script that the Chinese Communist Party is now writing will lead the world’s second-largest economy. … Things have been moving backward lately, in the direction of greater centralization and state control.

Unambiguously, that “greater centralization and state control”—which suffocates the intellectual, social, and economic strength of the Chinese people—is at the core of all the issues that Washington must deal with in shaping its course toward the communist regime.