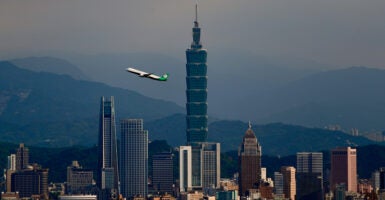 The Taipei 101 building in Taipei, Taiwan, was officially classified as the world's tallest building from its opening in 2004 until the 2009 completion of a taller structure in Dubai, United Arab Emirates. Formerly known as the Taipei World Financial Center, it is emblematic of Taiwan's economic vibrancy. (Photo: Ceng Shou Yi/ NurPhoto/Getty Images)

The newly published “Interim National Security Strategic Guidance” by the Biden administration underscores that the United States “will support Taiwan, a leading democracy and a critical economic and security partner, in line with long-standing American commitments.”

The interim guidance intends “to provide guidance for departments and agencies to align their actions as the administration begins work on a national security strategy,” and Taiwan may reasonably hope for some concrete and pragmatic ideas and actions from Washington as a result.

Taiwan and the U.S. have enjoyed a long history of cooperation based on the mutual commitment to shared values, and there is much room to grow the practical partnership. Taiwan has proved to be a reliable and steadfast partner for America in advancing freedom, opportunity, and prosperity in the region and around the globe.

Although communist China has done everything in its power to constrain Taiwan and limit its participation in international organizations and the world community, the country has nonetheless compiled an impressive record as a constructive member of the world community, demonstrated most recently by its successful handling of the ongoing global coronavirus pandemic.

Taiwan stands strongly for high degrees of both political and economic freedom.

In its latest edition of “Freedom in the World,” an annual report that assesses political rights and civil liberties around the globe, Freedom House classifies Taiwan as a “free” nation.

The report notes that “Taiwan’s vibrant and competitive democratic system has allowed three peaceful transfers of power between rival parties since 2000, and protections for civil liberties are generally robust.”

Taiwan’s free-market economic development is equally important and remarkable. Steady economic growth, enhanced by the pursuit of sound economic policies, has made the country one of the most prosperous in Asia.

According to the just published Heritage Foundation 2021 Index of Economic Freedom, Taiwan is the sixth-freest economy in the world, just behind Singapore, New Zealand, Australia, Switzerland, and Ireland.

Inching ever closer to the ranks of the economically  “free,” Taiwan has achieved its best ranking in the 27-year history of the index. The People’s Republic of China, by contrast, is “mostly unfree” as the world’s 107th-freest economy (out of 178 countries rated) and is likely to stay that way.

For many years, The Heritage Foundation has called for greater economic cooperation and broader dialogue between the U.S. and Taiwan through a bilateral trade and investment pact, which is the logical next step for upgrading mutual trust and expanding economic interaction between the two countries.

Policy experts from both countries have long called for just such an agreement.

In particular, last August, Taiwanese President Tsai Ing-wen unilaterally addressed American complaints over market access for beef and pork imports, which long had been a major complaint of the U.S. government and a barrier to establishing a free-trade agreement with America.

By addressing those complaints, Tsai has removed the substantive obstacles to starting free-trade negotiations with the U.S.

Such a practical, more institutionalized economic partnership would reinforce other vital diplomatic links between the two partners. More than ever, in fact, Washington needs to pursue and capitalize on every opportunity to promote free-market principles with like-minded and willing partners. America cannot go it alone in effectively addressing other countries’ non-market, unfree activities.

Clearly, the U.S.-Taiwan relationship is one worth investing further in over the next decade.