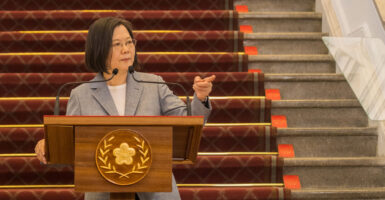 Taiwan President Tsai Ing-wen, pictured at a press conference Friday, expressed her desire this week for her country to reach a bilateral trade agreement with the United States, saying it would strengthen our engagement and help establish a rules-based trade order in the region. (Photo: Walid Berrazeg/SOPA Images/LightRocket/Getty Images)

Taiwan has long been a steadfast partner to America. Friday, it took a major step that will move the U.S.-Taiwan relationship forward and could help create new opportunities for the island nation to maintain its autonomy in the face of Chinese pressure.

Taiwanese President Tsai Ing-wen unilaterally addressed American complaints over market access for beef and pork imports, which long has been a major complaint of the U.S. government and a barrier to establishing a free trade agreement with America.

By addressing these complaints Tsai has removed the substantive obstacles to starting free trade negotiations with the U.S.

This was not easy for Tsai’s government to do—as amply demonstrated by the lack of action on it for several years. The U.S. should reciprocate her bold action: The Trump administration should announce an intention to reach a free trade agreement with Taiwan.

Taiwan is important to the U.S., and not just as a market. As a recent Wall Street Journal editorial pointed out:

[T]he nature of America’s commitment to the island ought to make more than a passing appearance [in 2020]. … Taiwan’s importance to America’s Pacific alliances has long been recognized. Beyond traditional grand strategy, Taiwan now has a special significance because of its technological prowess.

To their credit, both the Trump administration and Congress have indicated strong support for Taiwan. Most recently, Health and Human Services Secretary Alex Azar visited Taipei, which the editorial board of The Wall Street Journal described as “a rare and politically significant show of Cabinet-level support.”

The visit was a timely gesture of renewed support for one of America’s most willing and capable partners in the Indo-Pacific region, underscoring that Taiwan’s success against the coronavirus could spur greater U.S.-Taiwan cooperation.

It also emphasized the goodwill between the two nations formalized in the Taiwan Relations Act, which celebrated its 40th anniversary last year, and the six assurances President Ronald Reagan offered Taiwan concerning its security.

Indeed, in many profound and enduring ways, Taiwan and the United States have become partners that share a strong commitment to the values of democracy, the rule of law, and free markets. The relationship today is more constructive and forward-looking than ever.

However, more can and should be accomplished.

A liberalizing, bilateral trade and investment agreement is the logical next step for upgrading mutual trust and expanding economic interaction. Policy experts from both countries have long called for such an agreement.

Starting the negotiation process not only would strengthen the U.S. partnership with Taiwan but advance America’s strategic vision in the Indo-Pacific region.

In her recent virtual speech to Washington policymakers, Tsai—who won reelection to a second term in January—highlighted security, diplomatic, and economic challenges that confront Taiwan in her second term.

In a strategic effort to deepen the island democracy’s partnership with Washington and resist pressure from Beijing, Tsai emphasized that launching bilateral trade negotiations with Washington would be among her second-term priorities. She underlined that “we must be clear-eyed on how we can move forward,” signaling a willingness to overcome any differences.

To Washington’s credit, the U.S. National Security Council and the State Department have been pressing for free trade talks with Taiwan amid escalating U.S.-China tensions over trade, technological competition, global influence, and other issues.

In her speech, Tsai said:

I believe that the people of Taiwan can see the value and wisdom in building closer economic relations with the U.S. … And conversely we hope that the U.S. recognizes the broader strategic implications such an agreement would undoubtedly have.

The holdup has been the Office of the United States Trade Representative.

Writing to Sen. John Cornyn, R-Texas., Trade Representative Robert Lighthizer cited what he called the longstanding trade barriers that restrict market access for U.S. beef and pork products in Taiwan, despite previous commitments by Taiwan to fix these problems.

“Resolving these issues will be critical to deepening our trade and investment relationship with Taiwan,” Lighthizer said.

Tsai has checked that box. Now it is time for America to act by starting the formal process of institutionalizing free trade with Taiwan.