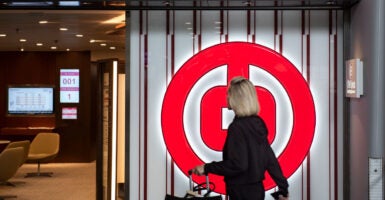 China’s tight control over state-owned enterprises will continue to stifle the nation’s economic vigor. Pictured: A customer passes by a branch of the Bank of China, a Chinese state-owned commercial banking company, in Hong Kong. (Photo: Budrul Chukrut/SOPA Images/LightRocket/Getty Images)

In recent years, however, that progress has come to a screeching halt, with pro-market reforms slowed and even derailed in some sectors.

In the 2000s, the one-party government in Beijing began redefining state-owned enterprise “reform,” using the phrase to refer to centralizing state control over key industries, the opposite of what it means in the rest of the world.

The Chinese Communist Party’s third plenum, in 2013, outlined how the state would reduce control of commercial state-owned enterprises, while pushing them in key industries that contribute the most to China’s economic development and national security to focus on “core” areas of their businesses.

In practice, that has meant ever-increasing deference by state-owned enterprises to party officials’ top-down control of their activities.

A recent report by the Asia Society Policy Institute takes a closer look at how China has done in its stated goal of reducing state control of commercial state-owned enterprises in the non-key industries. Unfortunately, in the second quarter of 2020, as in previous quarters, there was no progress.

The study highlights that state-owned enterprises in China have “maintained their presence in commercial sectors where Beijing had committed to letting the market play a bigger role.”

Achieving economic growth is not, of course, the primary goal of any communist dictatorship—that goal is always the party’s retention of full control of the country’s people, usually by any means necessary. The Chinese Communist Party does seem to understand, however, that spurring continued economic growth is a key factor in maintaining popular support.

That makes its continued affinity for relying on inefficient state-owned enterprises and other government-directed solutions particularly misguided. This is bad for China in the end, but it certainly causes distortions in markets beyond China’s borders as well.

China has not fared well in The Heritage Foundation’s Index of Economic Freedom, which measures economic governance in key areas related to economic growth and prosperity. Rated “mostly unfree,” the Chinese economy lags behind the majority of other countries in maximizing opportunities for growth.

In a recent commentary, Kevin Rudd, Australia’s former prime minister, shared a timely observation that “the objective lesson from history is that China’s economy does well when it is opened up, private business is allowed to flourish, and the state loosens its grip.”

Unfortunately, as Rudd pointed out, the Chinese Communist Party remains more “attached to maximizing political control even at a cost to economic, employment and productivity growth.”

That control, which stifles the intellectual, social, cultural, and economic vigor of the Chinese people, is at the core of all the issues that Washington’s new administration must deal with in charting its course toward the communist regime.