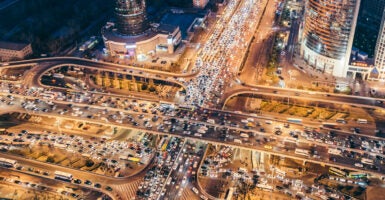 Chinese economic data is too smooth over time compared to authentic statistics. A report debunks it further by comparing it with other sources of information, such as satellite images of nighttime lights, which reveal wider fluctuations in economic activity than the official Chinese statistics. Pictured: A traffic jam in Beijing. (Photo: AerialPerspective Images/Getty Images)

China has a long history of opaqueness when it comes to reporting economic statistics.

Although the communist regime claims the economic numbers it reports are factual, a new report by the New York Federal Reserve shows China’s gross domestic product growth volatility is incredibly—and unbelievably—low compared to other countries.

The report details how China’s reported data is too smooth over time compared to authentic statistics, and debunks it further by comparing it with other sources of information, such as satellite images of nighttime lights, which reveal wider fluctuations in economic activity than the official Chinese statistics.

Unfortunately, opaqueness in Chinese GDP growth rates is just the tip of an iceberg of secrecy. As a recent report by The Heritage Foundation notes:

How China sets its overall budget, the actual size of its military budget, the relationship among various political factions, and even how specific decisions may be staffed are all elements that the [People’s Republic of China] deliberately strives to conceal.

Nonetheless, as the world’s second-largest economy, as a permanent member of the U.N. Security Council, and as a major power, the PRC has to provide some information about its economy, its political positions, and its various national and international endeavors, if only to interact with other states and economies.

The statistics China provides cannot be trusted, however; and their inaccuracies have wide implications for global markets in commodities, international investments, and for companies doing business with China.

As China becomes more integrated with global markets, the risk of surprise shocks or unforeseen damage to financial markets and to connected economies around the world from the false official Chinese statistics looms large.

In response, The Heritage Foundation earlier this year launched a China Transparency Initiative to facilitate global action to maximize exposure of the Chinese government’s manipulation and withholding of data. A recent event at Heritage shined a bright spotlight on the Chinese Communist Party’s role in that behavior.

China ranks only 103rd out of 180 countries ranked in the 2020 Index of Economic Freedom, and the opaque nature of government decision-making in state-owned enterprises and regulatory and investment activities is a big part of the problem.

The China Transparency Initiative and more reports like that from the New York Federal Reserve will hopefully shed some much-needed light into the dark cavern that is official Chinese economic statistics.