What the Story Behind Xi Jinping, Jack Ma, and the Ant Group IPO Says About China’s Economic Future 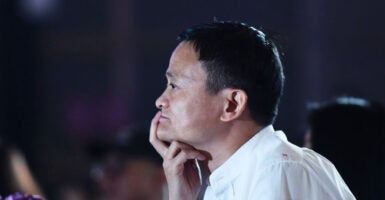 The pressure that the Chinese Communist Party is giving to Jack Ma and Ant Group signals that Chinese President Xi Jinping prefers to control businessmen rather than profit from them. Pictured: Ma, founder of Ant Group, attends the 2017 Global Women Entrepreneurs Conference. (Photo: Costfoto/Barcroft Media via Getty Images)

A central element of the Three Represents was that it allowed businessmen, even millionaires, to join the party. At the time, this was seen as inevitably leading to major reforms in China, perhaps even political liberalization. After all, businessmen want to make money.

So, allowing businessmen into the party would lead to its “capture” by businessmen. At a minimum, they would mellow the party; ideally, they would cause the People’s Republic of China to drop ideology entirely. Money would grease the wheels of progress, leading to a more liberal, more accommodating China.

Business understands that predictability is key to profitability. Given then-ongoing negotiations over China’s entry into the World Trade Organization, and the return of Hong Kong in 1997, there was an expectation that the rule of law would eventually follow.

The rule of law, after all, would provide China with trustworthy courts that would help settle disputes and would make the administration of rules and processes far more predictable.

Moreover, mainland China would not want to kill the golden goose of Hong Kong, so it would have to evolve to become more like Hong Kong.

Fast forward two decades, and it becomes clear that these were pipe dreams. China may have undertaken economic reforms to gain entry into the World Trade Organization, but Xi Jinping, now the secretary general of the Chinese Communist Party and the president of China, has made it very clear that he is not about to accept the rule of law as a matter of principle (despite lip service emanating from the recently concluded fifth plenum of the 13th Chinese Communist Party Central Committee.

Importantly, over the last several years, the party clearly has cracked down on a number of major Chinese corporations and the tycoons behind them. This has included Wanda Dalian, headed by Wang Jianlin; Anbang Insurance Group, whose chairman, Wu Xiaohui, was arrested; investment conglomerate Tomorrow Group, whose head, Xiao Jianhua, disappeared from a Hong Kong hotel; and HNA.

In this context, the difficulties confronting the planned initial public offering of Ant Group Co., an affiliate company of the Chinese Alibaba Group, seems to sustain this pattern.

Alibaba Group co-founder Jack Ma, perhaps China’s wealthiest individual, had stepped down in 2019 from his position as head of Alibaba, which has been dubbed China’s answer to Amazon. Ma, however, had kept a hand in running its affiliate, Alipay, the Chinese answer to PayPal, Visa/Mastercard, and electronic bill-paying apps.

Alipay was spun off from Alibaba in 2014 and eventually renamed Ant Group. The projected initial public offering for Ant Group was estimated at $34 billion, the world’s biggest IPO, dwarfing even the recent IPO for Aramco, the Saudi oil conglomerate.

The suspension was announced by Chinese regulatory officials, who noted that Ma had been called in for “supervisory interviews.” Given the pressures placed upon other Chinese tycoons, it would seem that Xi is signaling that “money isn’t everything” in China, and even massive wealth is no protection from party-imposed discipline.

Indeed, Ma’s recent criticisms of Chinese financial regulations, and the lack of a modern financial infrastructure, likely antagonized key Chinese leaders, as he made clear that the state-run banking system’s approach was part of the problem.

For Xi, the crackdown on Chinese businessmen, especially the super-wealthy, is likely to be as much an effort at safeguarding his own power as an attempt to drive out businessmen from the party. Xi is likely to face some criticism at the 2022 20th Party Congress, when he normally should have had to step down from power.

Instead, he has made clear that he will stay as the head of the party, effectively removing term limits for his position as president of China. Eliminating the wealthiest individuals may be an attempt to suppress the rise of any Russian-style oligarchs who might rally Xi’s critics.

If this is correct, then the abrupt termination of Ant Group’s IPO is like the crackdown on Hong Kong—part of a larger effort by Xi and the top Chinese political leadership to discourage challenges to their authority.