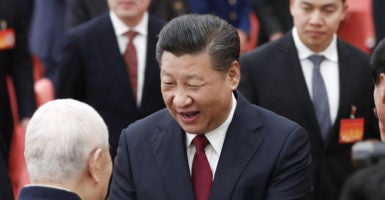 Chinese governance has often benefited from adopting and sustaining a long-term perspective. That is facilitated by a generally stable leadership system, with changes at the top only happening once a decade or so.

On Sunday, China’s official Xinhua News Agency published a set of proposed changes to the constitution of the People’s Republic of China.

They have triggered extensive discussions, as one of the proposals apparently calls for the removal of term limits for the Chinese president and vice president (premier). That is seen as clearing the way for Xi to stay in power beyond 2022.

It’s important to note that Xi occupies three key roles: general secretary of the Chinese Communist Party, president of the People’s Republic of China, and chairman of the Central Military Commission of the People’s Liberation Army. Together, they make him head of the ruling Communist Party, the head of state, and the head of the Chinese military.

While these three positions are generally held by the same person, for a brief period in 2002-2004, Hu Jintao was president and party general secretary, but not chairman of the Central Military Commission. Instead, his predecessor, Jiang Zemin, held onto that last position.

That was further complicated by the reality that the People’s Liberation Army is a party-army—that is, the People’s Liberation Army is not a national military, but rather the armed wing of the Chinese Communist Party. Therefore, it’s very difficult to separate the position of head of the military (chairman of the Central Military Commission) from head of the party (party general secretary), although Jiang did that.

So, while Xi is apparently seeking to extend his time as president (i.e., head of state), at least theoretically, he could still be replaced as head of the party and of the military.

As important, this is only one element in a larger package of some 20 proposed changes to the Chinese Constitution. Taken together, they reflect a broader consolidation of power and a rejection of any prospect of political reform.

Incorporating Xi into the national constitution would underscore his power and status over the entire nation, and not just party cadres.

The continuing role of the party is also emphasized, as language is added that emphasizes that the People’s Republic of China will hold to “core socialist values” and that the leadership of the party is “the defining feature of socialism with Chinese characteristics.”

Furthermore, a new network of “supervisory commissions” will be established to oversee both party cadres and governmental bureaucrats. These commissions will enforce anti-corruption measures and will have precedence even over the court system (which in China is typically responsive to party considerations in any case).

In essence, Xi’s anti-corruption campaign will be institutionalized and sustained for the foreseeable future.

Should all of these changes be enacted, Xi will have consolidated power back to himself and a small coterie of supporters to an extent arguably not seen since Deng succeeded Mao in 1978.

For the United States, that will mean that China’s long-term efforts—ranging from the Belt-and-Road Initiative (formerly the One Belt, One Road project) to its naval modernization efforts to its space program—will likely enjoy consistent leadership and programmatic stability.

If Xi succeeds in his efforts, the Chinese will be well placed to sustain a marathon through 2027 and perhaps beyond.